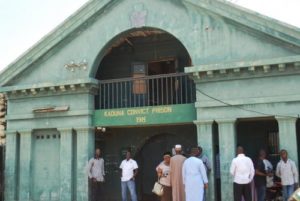 nmates in Kaduna Prison have attempted a jailbreak after riot broke out over the Coronavirus pandemic in the country.

The inmates, who fear that they could contract the deadly virus going by the poor ventilation and lack of protective items in the facility, mobilised in large numbers on Tuesday morning in an attempt to break free from the correctional centre.

Security personnel fired several gunshots around the facility to scare the inmates and bring the situation under control.

One person is currently feared to have been killed during the chaos while several prison officials, who sustained injuries have been rushed to a teaching hospital in city for urgent medical attention.