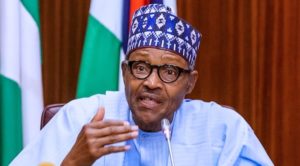 Nigeria’s President, Muhammadu Buhari, will address the country on Sunday evening — 35 days after Nigeria confirmed its first case of the Coronavirus pandemic.

President Buhari whose refusal to address the nation during a global crisis and fuelled speculation about his health, will speak to the nation in what the Presidency described as a “scheduled broadcast”.

A tweet by the Presidency on Sunday reads, “President Muhammadu Buhari will broadcast to the nation Sunday, March 29, 2020 at 7pm.

“Television, radio and other electronic media outlets are enjoined to hook up to the network services of the Nigerian Television Authority and Federal Radio Corporation of Nigeria respectively for the broadcast.”

Buhari Bans Movement In And Out Of ...