Explosion in Akure, Many houses, Church and school destroyed. 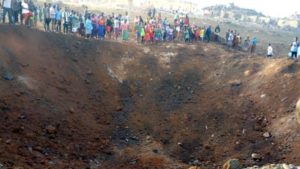 An explosion in Akure, Ondo state, on Saturday morning, destroyed many residential houses, a church building and a school.

The explosion suspected to be a bomb blast cut off the busy Akure/Owo road.

The incident, which happened less than a kilometre to Akure Airport, affected many residents of Eleyowo community, destroying the church and the school in the area.

Many people, who lived within the the church premises, were said to have been wounded.

Some reports on social media suggest that the explosion emanated from bombs being transported along the way by security personnel.

The blast caused panic among residents of Akure, Obaile, Eleyowo, Iluabo, Osi and other neighbouring settlements along the stretch of the highway.

The site at which the explosion happened has a deep crater cutting off the road and hindering vehicular movement.