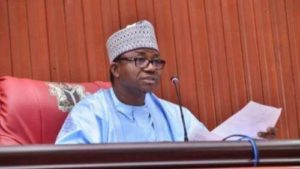 Speaker of the Edo State House of Assembly, Frank Okiye, has tested positive for Coronavirus.

Deputy governor of the state, Philip Shaibu, made the announcement on Wednesday in Benin, the capital, during a briefing with journalists.

According to Shaibu, Okiye recently returned from the United Kingdom and had gone into self-isolation upon his return to Nigeria.

He said, “The index case of Coronavirus in Edo State, is the Speaker of Edo State House of Assembly, Rt. Hon. Frank Okiye.

“He travelled to United Kingdom, he came back and went into self-isolation. He sent his sample for testing and it came out positive.

“He is in stable condition. His family members have also been tested and the tests came out negative.

“The only two persons he had direct contact with were his wife and daughter and they have been tested and fortunately, they tested negative.”

Governor of Edo, Godwin Obaseki, has also gone into self-isolation after having close contact with Chief of Staff to President Muhammadu Buhari, Abba Kyari, and Bauchi State governor, Bala Mohammed, who have both positive for the virus.