The best new series coming to Showmax this year 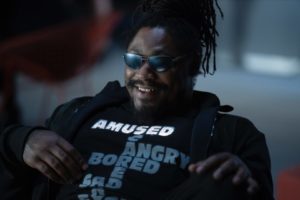 The Mercy and Ike reality show, Stephen King’s The Outsider, Westworld S3, The Plot Against America … there is so much to watch! Here’s what you can look forward to streaming on Showmax in the next few months:

A zany, new comedy sketch show featuring an array of oddball characters and off-the-wall situations, ranging from a misunderstood superhero to Croydon’s leading witch-doctor, played by Samson Kayo. Watch it online from 1 April

Set on the front-line of one of the biggest modern-day threats, the series follows a German cyber-crimes investigator sent back to her hometown of Timisoara, Romania to track down a brilliant hacker in a high-stakes hunt for the truth.

What happened to Mercy Eke and Ike Onyeama after Big Brother? This local reality show is about their relationship and struggles. Mercy’s sister Promise is a thorn in Ike’s side; he needs to earn her respect and show that he’s the right guy for her little sister. Or will Mercy have to sacrifice one of them? And will her culture and traditional beliefs get in the way of her commitment to Ike? Watch it on Showmax from 5 April.

Judging Matters is a legal reality series that uses the arbitration system to help real people get justice from a small claims court. In partnership with the Lagos State Ministry of Justice, and featuring Justice Olushola Williams, and Ebuka Obi-Uchendu. Watch it on Showmax from 6 April.

The highly anticipated BBC sci-fi adaptation of the first book in Malorie Blackman’s best-selling young adult novel series is set in a dystopian alternate history where black “Cross” people rule over white “Noughts”. Childhood friends Sephy and Callum must fight for more than simply the right to be together. Bingewatch it from 16 April

Streetwise 14-year-old foster kid Billy Batson can shout “SHAZAM!” and turn into the adult superhero Shazam, courtesy of an ancient wizard. Watch it on Showmax from 19 April

Based on the best-selling novel by Stephen King, The Outsider follows police detective Ralph Anderson, as he sets out to investigate the mutilated body of 11-year-old Frankie Peterson found in the Georgia woods. Start watching from 23 April, new episodes weekly.

The new season finds Julia, Alice, Eliot, Margo, Penny and the rest of the gang coping with the tragic loss of Quentin as they navigate the return of magic. However, not only is magic back, but now there is way too much of it. Based on the bestselling novels by Lev Grossman. Bingewatch the new season from 1 May.

Sci-fi drama Westworld is a dark wild west odyssey about the dawn of artificial consciousness and the birth of a new form of life on Earth. In Season 3, host Dolores meets construction worker Caleb (played by Aaron Paul), who challenges her beliefs about humanity. Bingewatch the new season from 6 May

The Plot Against America S1

An alternate American history story of the country’s turn to fascism told through the eyes of a working-class Jewish family in New Jersey in the build-up to World War 2, as Franklin D. Roosevelt loses the U.S. presidential election of 1940 to Charles Lindbergh. Watch it from 11 May.

When ace private eye Harry Goodman goes missing, his 21-year-old son Tim must team up with Harry’s former Pokémon partner, Detective Pikachu voiced by Ryan Reynolds. Watch it from 24 May.

Grace and Jonathan Fraser are living the perfect lives, then overnight a chasm opens: a violent death and a chain of terrible revelations. Left behind in the wake of a very public disaster, Grace must dismantle one life and create another for her family. Start watching from 25 May.

Also coming in May:

Set in a dangerous but fascinating Naples, My Brilliant Friend is the story of a life-long friendship spanning 60 years. When the most important friend in her life seems to disappear without trace, Elena Greco, an elderly woman living in a house crammed with books, starts writing her own story, and that of Lila, her best friend, and her own worst enemy.

Created by Issa Rae and Larry Wilmore, Insecure finds the funny in the black female experience. Bingewatch the whole season from 1 June.

Patrick Dempsey and Alessandro Borghi co-star in a dark and twisted thriller based on the world of millionaire bankers.

Run is a romantic comedy about a woman, Ruby Richardson who walks away from her ordinary life in the suburbs to revisit her past with her college boyfriend, Billy Johnson. Together they made a pact that if either one of them texted the word “RUN” and the other replied with the same, they would drop everything and meet in Grand Central Station and travel across America together.

In this new HBO comedy, a diverse group of young women navigate their lives through the male-dominated world of skateboarding in New York City.

Showmax is a streaming service that gives you access to loads of movies, series and live sport, on demand, from N1450 per month.Visit www.showmax.com, choose your plan and start watching.

Do you have a Visa or Mastercard from Zenith Bank? Claim your 28-day free trial of Showmax here, plus a 10% discount on your monthly subscription. No commitments. Cancel anytime.