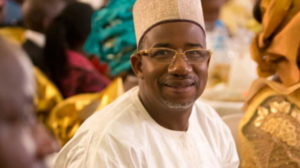 A statement by his Special Assistant on Media, Mukhtar Gidado, confirmed this on Tuesday.

This comes shortly after it emerged that the governor had contact with Mohammed, son of Nigeria’s former Vice President, Atiku Abubakar, who had earlier tested positive for the virus.

The statement by Gidado said, “This is to inform the general public that of the six initial tests carried out by the Nigerian Centre for Disease Control on His Excellency, his family members and aides that accompanied him to Lagos is out.

“One result was confirmed positive and it happened to be that of His Excellency, Bala Abdulkadir Mohammed, Executive governor of Bauchi.

“The governor is in self-isolation as his doctors and officials of NCDC have taken full charge of his quarantine.” 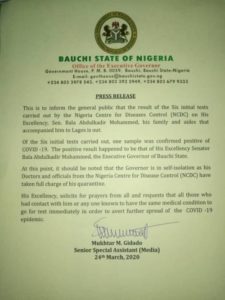