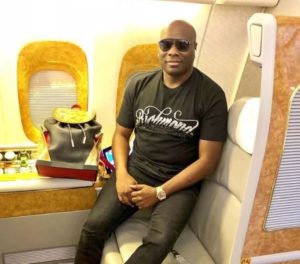 The Economic and Financial Crimes Commission has filed an application to stop Ismaila Mustapha also known as Mompha from travelling abroad to see his family.

Mompha is on trial at a Federal High Court in Lagos on an alleged N33bn money laundering and cyber fraud charge.

He and his firm, Ismalob Global Investment Ltd, were on March 4, 2020 re-arraigned before Justice Mohammed Liman on 22 counts.

They were first arraigned on a 14-count count charge last November 25 following his arrest last October 19 at the Nnamdi Azikiwe International Airport, Abuja.

According to the anti-graft agency, the defendant is based in Dubai, the United Arab Emirates.

The commission alleged that Mompha was a major figure in an organised transnational cyber fraud network, adding that he used Ismalob Investment to launder the funds, part of which he used in acquiring properties in Dubai.

At the resumed sitting on Thursday, Mompha’s counsel, Gboyega Oyewole (SAN), concluded his cross examination of an EFCC investigator, Kaina Garba, before informing the judge of the application.

Garba and three Bureau De Change Operators had on Wednesday testified against Mompha during examination-in-chief by EFCC counsel, Rotimi Oyedepo.

Gboyega said, “My lord, we have filed an application for the first defendant to be allowed to travel abroad so he can check on his family.”

But the EFCC said it had filed a counter application which was still at the court’s registry.

The agency’s counsel prayed the court for another date by, which time his application would be in the court’s file.

Justice Liman granted the prayer and adjourned until April 15 to hear both applications.

He was also said to have engaged in foreign exchange transaction without complying with the requirement of the Federal Ministry of Industry, Trades and Investment.

In another instance, Mompha was accused of procuring one Ahmed Sarki (now deceased) to make cash payment of 765, 657, 00 Euros in a commercial bank to a company, Pitacalize Ltd.

Buhari’s Daughter In Self-isolation After Returning To ...