The Lagos FilmLAB powered by the British Council 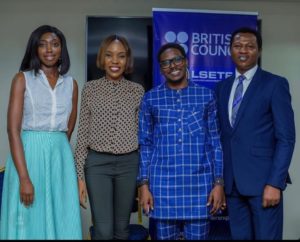 The Lagos FilmLAB powered by the British Council with the support of LSETF and delivered in Partnership with Creative England and BiolaAlabi Media took place earlier today Tuesday, 17th March,  2020 at the ZONE in Gbagada.

The theme was CREATING, PRODUCING AND PROTECTING YOUR CRAFT IN NOLLYWOOD.

There were lined up of amazing speakers  and panelists present at the seminar.

There were about 200 participants in attendance which comprised of filmmakers, storytellers, scriptwriters, directors, producers and cinematographers.

The speakers and panelists in no particular order are LALA AKINDOJU an award winning actress and producer. She spoke extensively on understanding the audience and need for communication and collaboration in the industry.

ABISODUN ADEWALE an intellectual Property And Technology (IPT) Lawyer. She spoke on intellectual properties and the need for creative to protect their work because it will afford them moral and economic rights.

ADEWUNMI ONI he is the current acting Director, Programmes and Coordination, Lagos State Employment Trust Fund (LSETF). He spoke on the essence of LSETF which is to create employment and financially support creatives and entrepreneurs. He mentioned in details the requirements creatives have to meet to access funds from LSETF.

A panel session was held after each of the speakers has spoken. Tobi a renowned filmmaker and producer was the host. He coordinated the panel session.

On the one hand, the participants were given opportunity to ask the speakers at least two questions. On the other hand, the speakers tried their possible best to give answers and clarity to the questions asked.

At the end of the panel session,  the host gave the closing remark, pictures were taken and the participants network.