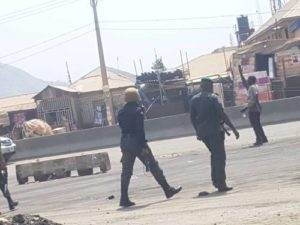 There is currently tension at Dutse Modern Market in Abuja as traders and Federal Capital Territory Task Force officials engage each other in a fight over the demolition of their shops.

Angry traders have set the temporary office of the task force on fire and also barricaded parts of the road.

SaharaReporters gathered that task force officials had on Sunday night moved their bulldozers to Dutse Modern Market and demolished all temporary structures. 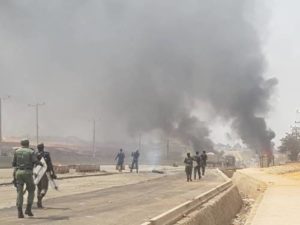 A trader, who spoke with our correspondent, revealed that the Federal Capital Territory authorities had allocated temporary structures to traders, who could not afford to rent normal shops.

The trader disclosed that the authorities suddenly served them quit notice a few days ago and informed them that the space for their temporary structures had been sold. 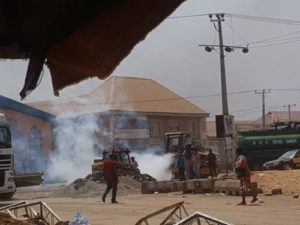 Irked by this development, the traders descended on the demolition team, destroying everything in sight in the process.

As of the time of this report, armed policemen had arrived the scene, firing teargas to disperse the crowd.

Commercial activities are currently grounded in the area while vehicular traffic had built up in the axis as well.

Coachella To Be Postponed due to Coronavirus