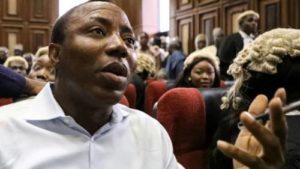 Rights activist and journalist, Omoyele Sowore, has opposed the application filed by the Nigerian Government seeking leave for its witnesses to wear facial masks to testify against him in his ongoing trial.

In a counter affidavit filed by his lawyer, Femi Falana (SAN), at the Federal High Court, Abuja, with charge No: FHC / ABJ/ CR 235/2019, the activist is asking the court to dismiss the application.

He added that the application is vexatious, ill-conceived and attempt to waste the time of the court.

He maintained that an application pursuant to section 232 cannot be brought in proceedings not hinged on terrorism or money laundering charges.

Falana said, “My Lord it is our contention that the entire content of paragraphs 4; a, b, c, e, f, g, h, k and 5 respectively of the applicant’s affidavits offends the provision of section 115 (1), (3) and (4) of Evidence Act 2011 (as amended) and ought to be struck out for being so incompetent.”

Sowore was arrested in the early hours of August 3, 2019 by operatives of the Department of State Services for calling on Nigerians to take to the streets in peaceful demonstrations on August 5 to demand a better country from the administration of President Buhari.

He was kept in unlawful detention from that period until December 5, 2019 when he was finally released on bail despite two court orders earlier sanctioning his freedom.

In a twist of event, DSS operatives invaded the Federal High Court in Abuja on December 6, 2019 to rearrest him without any court order.

He remained in unlawful detention until 18 days later when he was released by the secret police for the second time.

At the resumption of his trial in a case brought against him by the Nigerian Government, the prosecution failed to prove accusations against him and even went ahead to dropping seven of the charges earlier preferred against him.

The trial resumes on March 11, 2020 and this time government is accusing him of attempting to overthrow Buhari’s administration by calling on citizens to protest against the regime.