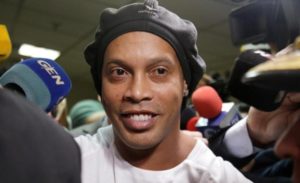 Former Brazil and ex-FC Barcelona player Ronaldinho Gaucho is adapting quickly to life in a Paraguayan jail, the head of the facility told Reuters on Monday.

The former Paris St-Germain (PSG) forward’s lawyers are however hopeful he may soon be released into house arrest while the investigation continues.

“In broad terms he is doing very well,” prison warden Blas Vera told Reuters in a telephone interview. “I see he is in good spirits, just like you see him on television, always smiling.”

Vera said Ronaldinho and his brother Roberto Assis, who were arrested on Friday for using a false Paraguayan passport, would present their case to a judge on Tuesday.

Their lawyer Sergio Queiroz told Reuters they had asked a court to release them into house arrest and offered guarantees they were not a flight risk.

Vera said the 39-year old former AC Milan player and his brother had beds, a television and a fan in their cell at the prison on the outskirts of the capital Asuncion.