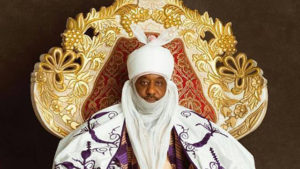 Deposed Emir of Kano, Muhammadu Sanusi II, has said that he has taken his removal in good faith because it was the will of Allah.

In a video believed to have been recorded shortly before he was taken away from the palace in Kano on Monday, Sanusi stated that he had no reason to be sad as everything was already destined by God.

He said, “With almost six years on this throne and (in charge of) our heritage, today (Monday), the Almighty Allah, who gave me the leadership, has destined to take it back.

“As I always say, leadership has predetermined tenure, the days Allah destined are numbered. When the days come to an end one must leave.

“We have accepted whatever Allah decides. We have agreed. We appreciate (God). We are happy and we know it is what is best for us.

“We enjoin everyone to remain peaceful. We have directed our family, our children and those that support us that whoever gets it and is endorsed by the people they should pay allegiance to him.

Since coming on the throne, Sanusi, who rose to become Governor of Nigeria’s Central Bank as a professional, has always spoken out against harmful traditions and practices in the North, often times drawing the ire of elites in the region.

The executive council headed by Governor Abdullahi Ganduje of Kano claimed that Sanusi was removed for displaying disregard for laid down rules.

He has been banished to a town named Loko in Nasarawa State where he is expected to live quietly with his family.

Coachella To Be Postponed due to Coronavirus