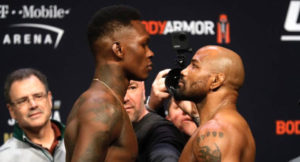 The fight exhausted the duration of the bout (Round 5) with some adrenalin moments far in between.

Adesanya, after retaining his belt, said: “I did what I had to do, I capitalised on his weakness and you can see him (Romero) limping his leg.”

Romero, on the other hand, queried Adesanya’s style, saying he didn’t come out to fight. “The crowd paid to say a real fight, but he was just running around, he didn’t fight. It would have been different if he came all out.”