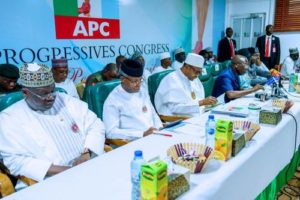 Following a court order removing Adams Oshiomhole as National Chairman of the All Progressives Congress, the National Executive Committee of the party has scheduled an emergency meeting.

While Oshiomhole is yet to accept the order of the court, the party secretariat has been placed under heavy security.

He has also appealed the order as the party promised to abide by the order of the court.

In bid to control the rising heat, the party has called for an emergency NEC meeting.

The meeting was announced by the acting National Secretary, Chief Victor T. Giadom.

In his announcement, he said, “All NEC members to attend the emergency meeting in line with Article 25 (B) (II) of the constitution of the party.”