Nigerian Government Seeks To Mask Witnesses In Case Against Sowore

The Nigerian Government has filed a motion to mask its witnesses in the case against Omoyele Sowore.

Sowore is currently under trial for planning a protest demanding good governance from the President Muhammadu Buhari-led administration.

The trial was adjourned to continue on March 11,12 and 13 after failure of the Department of State Services to give Sowore and his legal team necessary documents to argue their case.

In a Facebook post on Friday, Sowore revealed that the government had filed a motion to mask its witnesses.

He wrote, “UPDATE: Just now the @MBuhari regime filed a motion in court that they want to mask their witnesses in the #RevolutionNow trial scheduled for next week.

“Same prosecutors said they were ready for trial last month with unmasked witnesses!?

“This is their latest tactic to seek another adjournment! Funny people!” 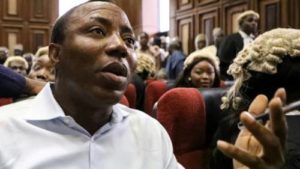 Earlier this week, United States-based advocacy organisation, Robert F. Kennedy Human Rights, said that Sowore was being persecuted by the Nigerian Government for speaking truth to the leadership of the country.

In a recent documentary detailing how the administration of President Muhammadu Buhari had infringed upon the right of the journalist for simply criticising its failures, the international rights group condemned the attempt by the Nigerian Government to silence critics and shrink the civic space.

Sowore was arrested in the early hours of August 3, 2019 by operatives of the Department of State Services for calling on Nigerians to take to the streets in peaceful demonstrations on August 5 and was kept in unlawful detention from that period until December 5, 2019 when he was finally released on bail despite two court orders earlier sanctioning his freedom.

In a twist of event, DSS operatives invaded the Federal High Court in Abuja on December 6, 2019 to rearrest him without any court order.

He remained in unlawful detention until 18 days later when he was released by the secret police for the second time.