FG says Nigeria yet to access funding from international donors

The Federal Ministry of Health (FMoH) says it is yet to access funding from international donors on Coronavirus (COVID19) preparedness in the country and that all expenditures on it are domestically funded.

Mr Abdulaziz Mashi Abdulaziz, Permanent Secretary, FMOH, said this while the Minister of Health, Dr Osagie Ehanire, was giving an update on the disease in the country, on Friday in Abuja.

News of Agency of Nigeria (NAN), reports that IMF is making available about 50 billion dollars through its rapid-disbursing emergency financing facilities for low income and emerging market countries that could potentially seek support.

Ten billion dollars of the amount is available at zero interest for the poorest members through the Rapid Credit Facility.

The World Bank Group President David Malpass, also announced an initial package of up to 12 billion dollars in immediate support for countries coping with COVID-19. 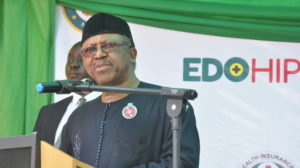 The package will include emergency financing, policy advice, and technical assistance.

Abdullaiziz, said: “it is just the domestic funding that we have.

“The one that was announced by International Monetary Fund (IMF) and World Bank Group, are interventions made by the two institutions.

“But guidelines and framework of accessing the money is still yet to be developed.

“I believe the country representatives in various countries where the disease manifested will be getting in touching with them to see how we can access it, but for now I think it is strictly domestic funding the country is accessing.”

Abdulaziz disclosed that some donors and partners met with the Nigeria Centre for Disease Control (NCDC), to see how they could support with detection and response to the disease.

He described the interventions as a timely and important by their commitment to fight against Covid19.

“The interventions are timely. This is not just a public health crisis, it is rapidly becoming a global crisis of health, economics and politics.

“That’s why the country is ramping up to execute COVID19, response, isolation, quarantine, as well as develop measures to contain and detect the outbreak,” he said.

Abdulaziz recalled that such intervention gave birth to the establishment of the National Ebola Emergency Operations Centre (EEOC) in Yaba, Lagos state.

The Perm. Sec said that the government was mobilising relevant agencies to get the country ready for the virus.

He urged Nigerians to join in taking the actions needed to be safe, smart and disregard fake reportage of the virus.

“We will emphasise early detection, isolation, treatment and the government’s engagement,” he said.

While responding to the remarks of the Senate President on the poor state of the isolation centre in Gwagwalada, Abuja, Ehanire said that the facility was now in good condition.

The minister clarified that all the monies approved to the Nigeria Centre for Disease Control (NCDC), had been disbursed.

Ehanire revealed that the government had already set plans in motion to put up a state of the art.

According to him, construction is ongoing, and the contractor has also been asked to fast-track it.

“They said it will be finished by next month, so they used the building which they wanted to use for intensive care, it has been furnished and prepared, staff have been trained and all protocols have been established.

“The Senate President went there when the finishing touches were being put and I think he expected that the bed was already made.

“Another team visited the next day, they saw that it was already completed and the chairman of the senate committee said there has been a lot of improvement.

“All monies approved got to NCDC, but had to go through a lot of process, but NCDC had made procurement on credit from its regular suppliers, they were given materials on credit, but many of them have been settled,” he explained.

He added that the measure taken not to wait until money was available before making the necessary procurement was a good one.

Responding to a question from newsmen the minister confirmed Prof. Maurice Iwu, former INEC Chairman’s claim to have a product that could be used to treat the Covid-19.

Ehanire said “Iwu in 2015 developed a product to work against the SARS virus, and suggested that since the virus is similar to COVID19, it could be used”.

He clarified that the product developed by Iwu was not new and was already being tested by some research institutions in the United States of America.

NAN reports that Nigeria has published the first African SARS-CoV-2 genome sequence, from the COVID19 case in Nigeria.

This was carried out in collaboration with the Nigerian Institute of Medical Research, (NIMR), African Centre of Excellence for Genomics of Infectious Diseases (ACEGID), and the Lagos University Teaching Hospital (LUTH).

The project was under the coordinations of the World Health Organisation (WHO) and NCDC.