I Can Make My Son Chief Of Staff And Nothing Will Happen –Ondo Governor, Akeredolu 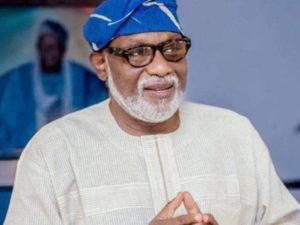 Governor of Ondo State, Rotimi Akeredolu, has said that he can appoint his last son, Babajide, as his Chief of Staff if he wishes.

The governor, who said nothing would happen if he took such decision, disclosed that his son was qualified to hold the position because he worked hard towards his emergence in office.

Akeredolu made the remarks during a dinner held at the International Event Centre in Akure, the state capital, to celebrate the third anniversary of his administration.

He said, “When somebody says Baba (Babajide) is this, I just laugh at them. If I wanted to make Baba my Chief of Staff, he can be.

“Ask yourself, how many of you did more than Baba during the campaign? How many?

“The young boy (Babajide) was going everywhere and all of us saw him but we decided because he won’t want it. I just said leave him.

“My son is satisfied, that is why, if he was not, I will put him somewhere, there is nothing anybody can do.

“I will put him, there is nothing you can do. Is he not my son? Is he not from Ondo State? Has he not worked?”

Speaking further, the governor explained the role his wife, Betty, had been playing in his government since coming into office.

He said, “I can never forget the great work that my wife has done in this state. I am not sure you can find a better First Lady, someone who has great interest in women.

“She is committed to women’s cause. I am not too sure I know many women who are in government today who are there on their own. It’s all through her efforts.”

Akeredolu said he had nothing to fear about in seeking re-election during the October 10, 2020 governorship election in the state.