Presidential Amnesty Coordinator, Charles Dokubo, Was Sacked While In London 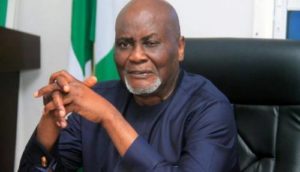 Coordinator of Presidential Amnesty Programme, Prof Charles Dokubo, was in London, United Kingdom, when he was fired by President Muhammadu Buhari on Friday.

Dokubo, who has been embroiled in different corruption allegations in running the affairs of the programme, was recommended for suspension by a committee set up by the National Security Adviser.

In a statement by Femi Adesina, media aide to President Buhari, Dokubo’s removal follows numerous allegations and petitions against him.

Adesina said a technical committee will henceforth oversee the programme.

The statement reads, “Consequently, the NSA recommended to Mr President that the Coordinator of the Amnesty Programme, Prof Charles Dokubo, be suspended, a recommendation that has been approved and which takes immediate effect.

“The President has also directed that the caretaker committee set up to review the programme should oversee the running of the programme henceforth with a view to ensuring that government objectives were achieved.”

Also, it was gathered that anti-graft agencies may pick him up on arrival in the country with a view to investigating allegations against him.

Recall that SaharaReporters had in April 2019 reported and exposed plans by Dokubo in a leaked audio to steal N4.88bn before President Buhari reshuffles his cabinet.