Rob Kardashian has been denied full custody of daughter Dream 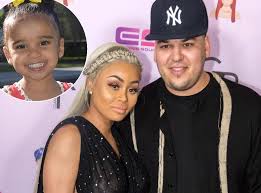 Blac Chyna has won her first victory in the custody battle she has with ex Rob Kardashian. Rob Kardashian filed an ex parte emergency motion in January and asked the court to immediately remove three-year-old Dream Kardashian from her mother’s home and move her in immediately with Rob. The Blast obtained legal documents pertaining to the case and reported that the presiding judge determined there was no evidence that Blac Chyna proved to be an immediate threat or danger to her daughter.

It was earlier reported that Khloe Kardashian has vowed to help Rob gain sole custody of Dream. According to reports, Rob reportedly is seeking to have full custody with Blac Chyna only having monitored, limited visitation with her daughter.

Blac Chyna reportedly argued that she was shocked to learn that Rob Kardashian had filed the ex parte and she disagrees with his claims that she is an unfit mother, abusing drugs and alcohol and poses a danger to Dream.

Additionally, Blac Chyna stated that the details from Rob’s ex parte were leaked to the press and have caused her bad publicity.

No Officer has the right to search ...

Coronavirus and how to avoid it