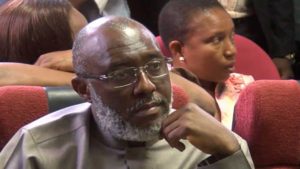 Justice Okon Abang, held that Mr Metuh received the money from the office of the National Security Adviser, Sambo Dasuki.

The defendant and his firm, Dextra Investment Limited were charged on a seven count charge of criminal diversion.

He is also accused of carrying out transaction of about $2m without going through a financial institution.

The defence had argued that since Colonel Dasuki has not been found guilty of any offence, money received by the defendant cannot be said to be unlawful.

The court held that Mr. Metuh and the office of the NSA had no contract but yet he received the sum of four hundred million naira.

That alone in the mind of the court, is an independent evidence of unlawful acts.

Joeboy, Wurld, Others Perform As MTV Base ...