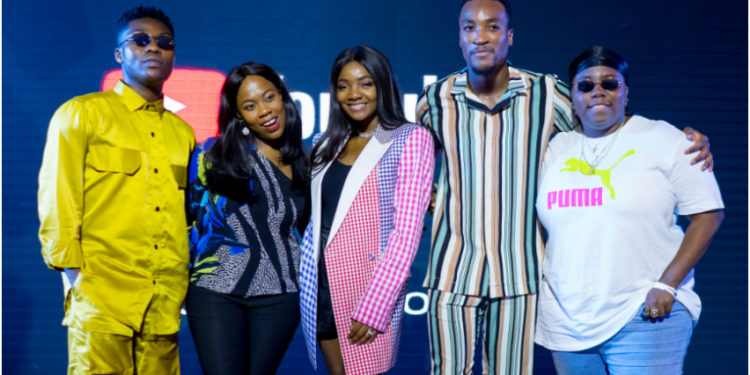 YouTube today announced that four fast-rising Nigerian artists have been selected to receive support on their individual music journey. YouTube will be providing the artists with the tools to propel their music, grow their presence on YouTube and accelerate the growth of their audience globally. This was announced at an event tagged, “A celebration of Afrobeats” held in Lagos, Nigeria this evening.

The four Nigerian artists are Kizz Daniel, Reekado Banks, Simi and Teni. This follows a YouTube commitment to Nigerian Afrobeats talent that was made at the Google for Nigeria event in July; when the initiative to support 10 emerging Nigerian artists through Mr. Eazi’s emPawa program was announced.

These four selected artists will be engaged in a series of workshops and content creation sessions, experimenting with content formats on YouTube. They will develop their music and visual content, becoming experts at building deep connections with their fans. In addition, they will receive marketing promotion and education on best practices for growing and engaging their audience on an international scale.

The artists will also serve as models for other African artists on utilising the global power of the YouTube platform to expand and build a global audience. Leanings from their experience will be gathered as feedback to be shared with the entire artist community.

YouTube has a long-standing commitment to Nigerian (and African) artists, creators and other players – from Burna Boy – Artist on the Rise in November 2018 and the Artist Spotlight Stories series in February 2019 to Mr Eazi, whose career has led him from Lagos to London, and most recently, Rema, who is a part of YouTube Music’s international artist development program, Foundry.

YouTube has played an essential role in the discovery and development of the African sound, exporting African music to listeners worldwide.

Speaking at the event, Addy Awofisayo, YouTube Content Partnership Manager for Sub-Saharan Africa, said, “We are very excited to partner with these amazing artists to support their journey as their music travels across borders and they expand their audience globally.”

“YouTube has been a mainline for African artists to connect all over the world, from Yemi Alade’s “Johnny” hitting over 100 million views on YouTube or Davido’s “Fall” at over 150 million views, there is no doubt that global audiences are dancing to an African beat,” Awofisayo adds.

Teniola Apata also known as Teni the Entertainer, who attended the event said she was particularly excited because her fans will now get to see her beyond the music videos, to behind the scenes and live show content on YouTube. She said, “YouTube has no borders and it’s exciting to see my music resonate with not just people in my home country, but fans across the world.”

Kizz Daniel also mentioned that he was excited about the opportunity to work closely with YouTube to expose his music and culture to a global audience. “YouTube is a crucial platform that allows my music travel globally and connect to a new audience,” he said.

YouTube has not just played an essential role in the discovery and development of African sound but also in exporting African music to listeners worldwide. Through this partnership with the artists, YouTube is reinforcing its commitment to exporting Afrobeats music, culture and dance – beyond just the sound – to audiences across the world who may not have experienced it.

ABOUT YOUTUBE
Launched in May 2005, YouTube is the world’s most popular online video community allowing billions of people to discover, watch and share video. YouTube provides a forum for people to connect, inform and inspire others across the globe and acts as a distribution platform for original content creators and advertisers large and small. YouTube is a Google company. www.youtube.com

ABOUT KIZZ DANIEL
Oluwatobiloba Anidugbe, professionally known as Kizz Daniel is an award-winning Nigerian recording artist, performer and entertainer. Best known for his chart-topping singles “Mama”, “Woju”, “Yeba”, “One Ticket”, “Madu” amongst others. Kizz Daniel is one of the pioneers of contemporary afro-pop music. He is signed to his own record label, Fly Boy Inc.

ABOUT REEKADO BANKS
Ayoleyi Hanniel Solomon, professionally known as Reekado Banks is an award-winning Nigerian international singer, songwriter and performer. He made his big break in 2014 after penning a deal with Mavin Records. In 2016, Reekado released his 21-track debut album, Spotlight. The project landed on the 10th spot of Billboard’s World Albums Charts and bagged the Best Album of the Year at the Headies.

ABOUT SIMI
Simisola Bolatito Ogunleye, professionally known as SIMI is a singer, songwriter, creative director and sound engineer. She has 1 EP and 3 albums to her credit with hit songs such as “Jamb Question”, “Joromi”, “Jericho”, “Ayo” amongst others. Simi is currently an independent artist and the MD/CEO of her record label, Studio Brat.

ABOUT TENI
Teniola Apata, professionally known as TENI (also referred to as Teni The Entertainer or Teni Makanaki) is an award-winning Nigerian songwriter, singer, performer, actress and social media sensation. A graduate of Business Administration from the American Intercontinental University in Atlanta, TENI notched numerous nominations including Best International Act 2019 (Nominee) at the BET Awards.

IT’S BEEN A GREAT HONOUR PLAYING WITH ...