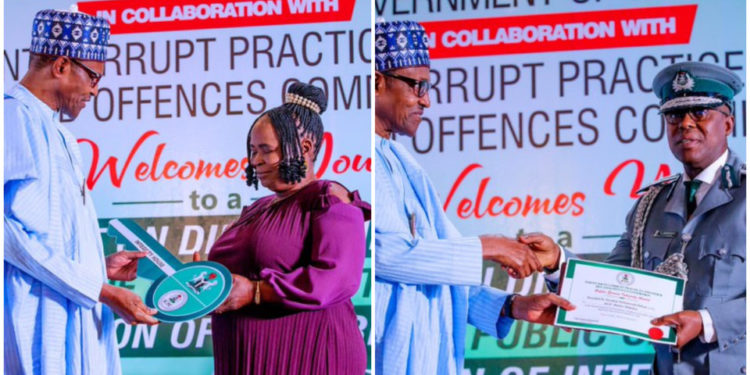 President Muhammadu Buhari has honoured two public servants, Bashir Abubakar and Josephine Ugwu for their integrity in carrying out their official duties.

The president presented Abubakar and Ugwu, an ICPC Integrity Award and shared the photos on his social media page.

On many occasions, Ugwu, a cleaner at Murtala Muhammed International Airport returned millions of naira forgotten at the airport, despite earning a meager salary.

Abubakar, the assistant comptroller-general of customs, rejected $412,000 dollars (N150 million) bribe offered to him by drug traffickers to bring 40 containers of Tramadol into the country.

On more than one occasion, Mrs Josephine Ugwu, a former cleaner at the Murtala Mohammed International Airport (MMIA), Lagos, found and returned millions of naira forgotten in the toilet by airport users. Today it was my privilege to present her with an ICPC Integrity Award. pic.twitter.com/PsQT4u5Elc

Also found worthy of honour was Bashir Abubakar, an Asst Comptroller-General of Customs, who rejected a bribe of $412,000 per container offered him by drug traffickers seeking to bring 40 containers of Tramadol into Nigeria. A fine example of incorruptibility,worthy of emulation. pic.twitter.com/VJ47pSy14u