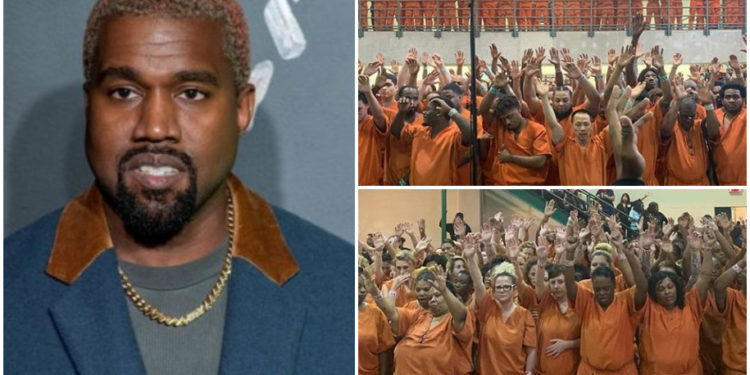 Kanye West has left Harris County jail inmates in tears when he performed a surprise concert at the in Houston, Texas. West shared video clips from the concert on his social media page.

He and his choir performed songs from his gospel album “Jesus is King,” leaving inmates in tears as they knelt in worship.

The Harris County Sheriff, Ed Gonzalez, said that the rapper described his  concert as a mission and not a show.

On this date, @kanyewest visits @HCSOTexas jail system. “This is a mission, not a show”- Kanye

Reacting to the concert, a public affairs director for the Harris County Sheriff’s Office West said West brought some light to people who needed it at the jail.

Say what you want about the man. But @kanyewest and his choir brought some light to people who needed it today at the Harris County Jail. pic.twitter.com/ornRlEldNP

According to Houston Chronicles, West performed for more than 200 male inmates before using an underground tunnel to perform for a smaller crowd of women inmates.

After kicking off with one performance for more than 200 men at the 701 San Jacinto building, @kanyewest ducked down into the underground tunnel and turned up in the main Baker Street jail to do a second show for a smaller crowd of women. https://t.co/VNJqoq3Ult pic.twitter.com/95ZFVWQ0HC