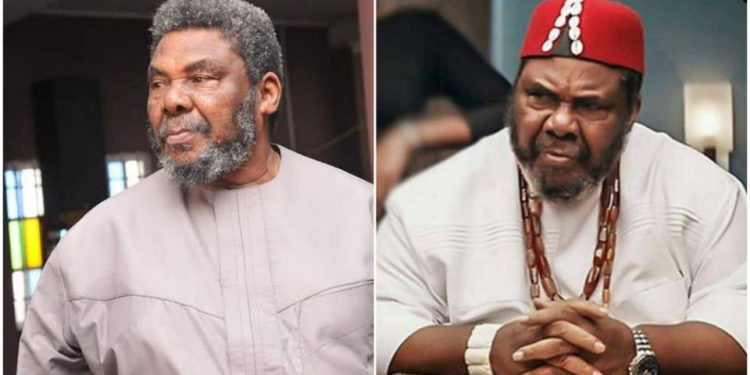 A young Nigerian woman simply identified as Sugabelly has come under fire for saying that veteran entertainer, Pete Edochie is a bad actor. According to Sugabelly, Edochie has been playing the same role all his life.

The elderly actor is quite loved among Nigerians especially for his proverbs. In movies, the actor is usually seen acting as a king, an elderly chief, a father or an herbalist.

Reacting to the elderly actor’s constant roles in movies, Sugabelly said he is not a good actor.

Following her tweet, Nigerians have responded to her. While some defended the elderly actor, blaming directors for stereotyping him, some think that Sugabelly is just rude for calling the veteran a bad actor.

He's been playing the same role his entire life.

But Nigerians live and die by seniority so the older he gets, the less anybody is able to point this glaring elephant in the room out.

Read some reactions below:

But that one role, no one has as much depth as Pete edochie, he owns that character. Literally and metaphoricaly. He's good Suga

Lol he's given the same roles and paid for the same roles.. Actors are merely to be blamed for the industry folly. Leave the man alone he's got to eat

I am just worried for you that you might never enjoy a pinch of the lime light, fame, respect and honor Pete Edochie is enjoying.
Celebrity is not a right word to describe Pete Edochie, he is a Legend#PeteEdochie

Chief at this point. Your knowledge about Pete's movies is inadequate. Watch more of his movies from Things fall apart and come back again with something concrete.

1st off, This is Nigeria… Our movies invariably fall into 3 categories at most.

Now inside the 3, how many varying roles are there for a man his age??

Lets not even mention that in Naija, excelling in a role means you will get cast in it over and over again.

He isn't a bad actor. You could say that he acts particular roles but compare him with other actors who play the same roles & the difference is clear. Don't knock talent, professionalism, & longevity. He's a national treasure

It's obvious you started watching Pete Edochie in the new mainstream Nollywood movies. A little research will do u a whole lot of favour

Jay Z should stop been a rapper and start singing Ballard so we know he is just not a rapper? man is too good on that role that you never get tired of seeing him act it. You can be doing same thing over and over and still be good, he needs not play other roles to satisfy you.

Omg this is the most ridiculous thing I’ve ever seen ! You clearly haven’t watched half of hos movies! And the ppl that liked this are all stupid !