NIGERIAN TRAVEL CONSULTANT, EGHOSA AGBONIFO REPLICATES HIS WEDDING PHOTO FOR HIS WIFE AFTER 10 YEARS OF MARRIAGE 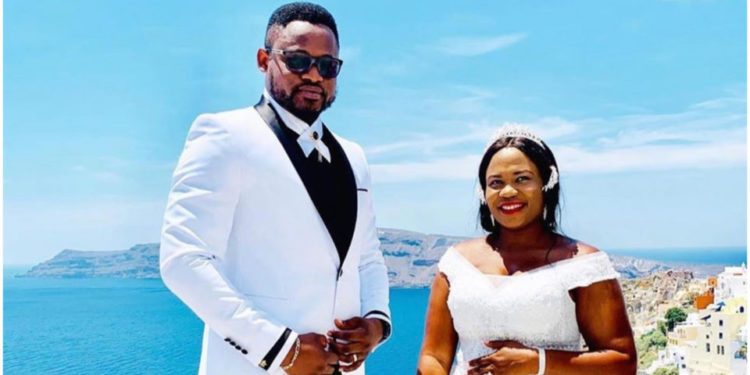 A Nigerian travel consultant, Eghosa Agbonifo has shared how his journey into marriage started to encourage his fans.

According to him, his wife was mocked for accepting to marrying him years back because he was poor. For their wedding ceremony, he was given a suit by his friend because he could not afford one.

10 years later, he decided to replicate his registry photo because his wife did not like the one they took years back.

She was RIDICULED for accepting to be my WIFE 10 years ago. They said “that BOY wey dey sell okrika clothes na you carry BELLE for?“. Not to disappoint her, I gathered little money, rushed down to OREDO LOCAL GOVERNMENT REGISTRY to quickly do the registry and legalized our marriage.

With the support of my friend PRINCE HARRISON AYONOTE (he gave me his car for free and also gave me the suit I wore) and AZETA OMOAGHE ensured all logistics was put in place.

Now let’s cut the long story short, my WIFE said the picture then wasn’t too interesting because she was almost 8 months gone. I told her never to WORRY , that as time progresses I will replicate the registry but in another level (Upgrade).

This year JUNE 13th, I decided to surprise her during our 10th ANNIVERSARY to celebrate her in one of the world’s best islands (SANTORINI ISLAND IN GREECE). Had to share this for the love of throwback and whatever you are going through today, it is not permanent just keep pushing. #tbt #love.