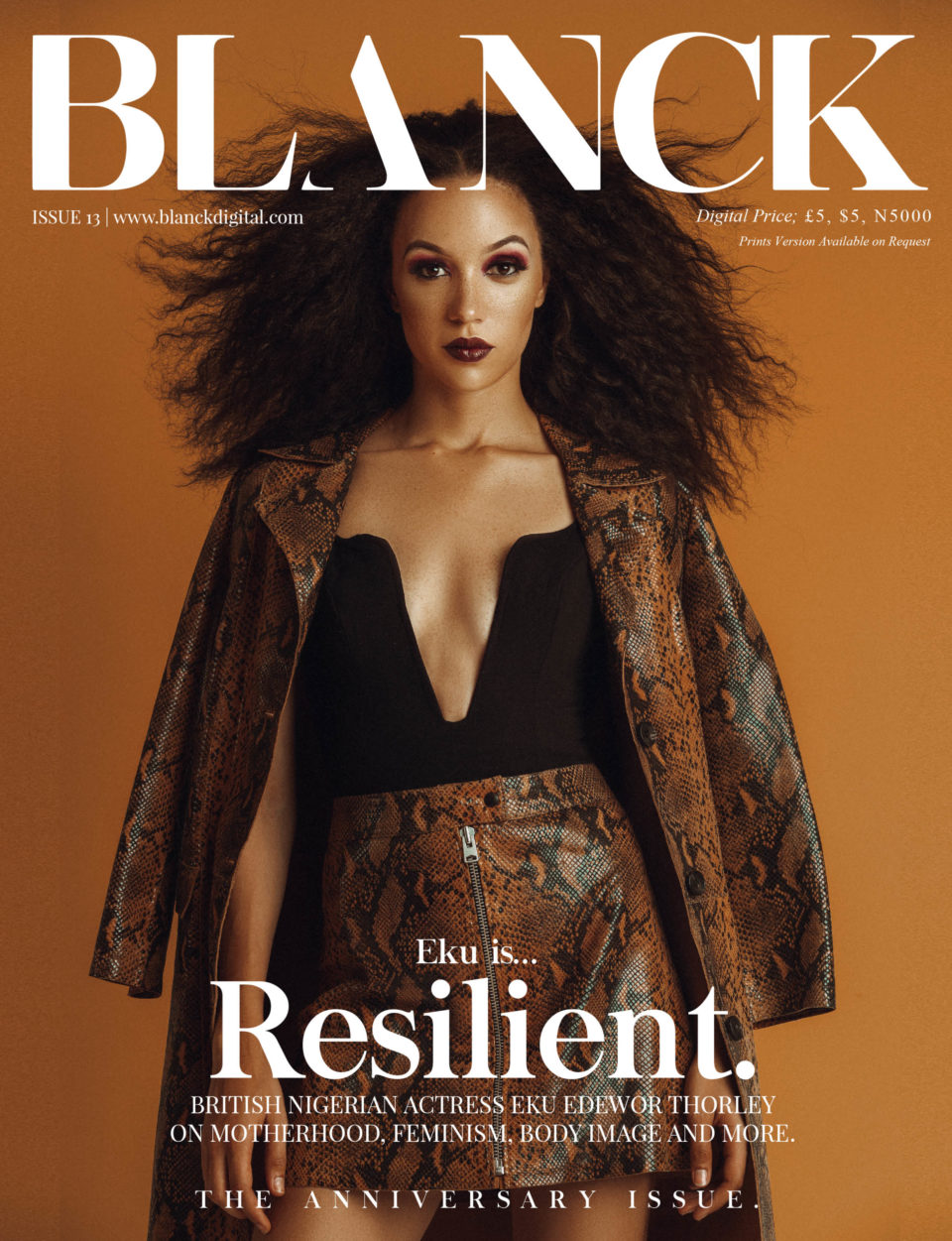 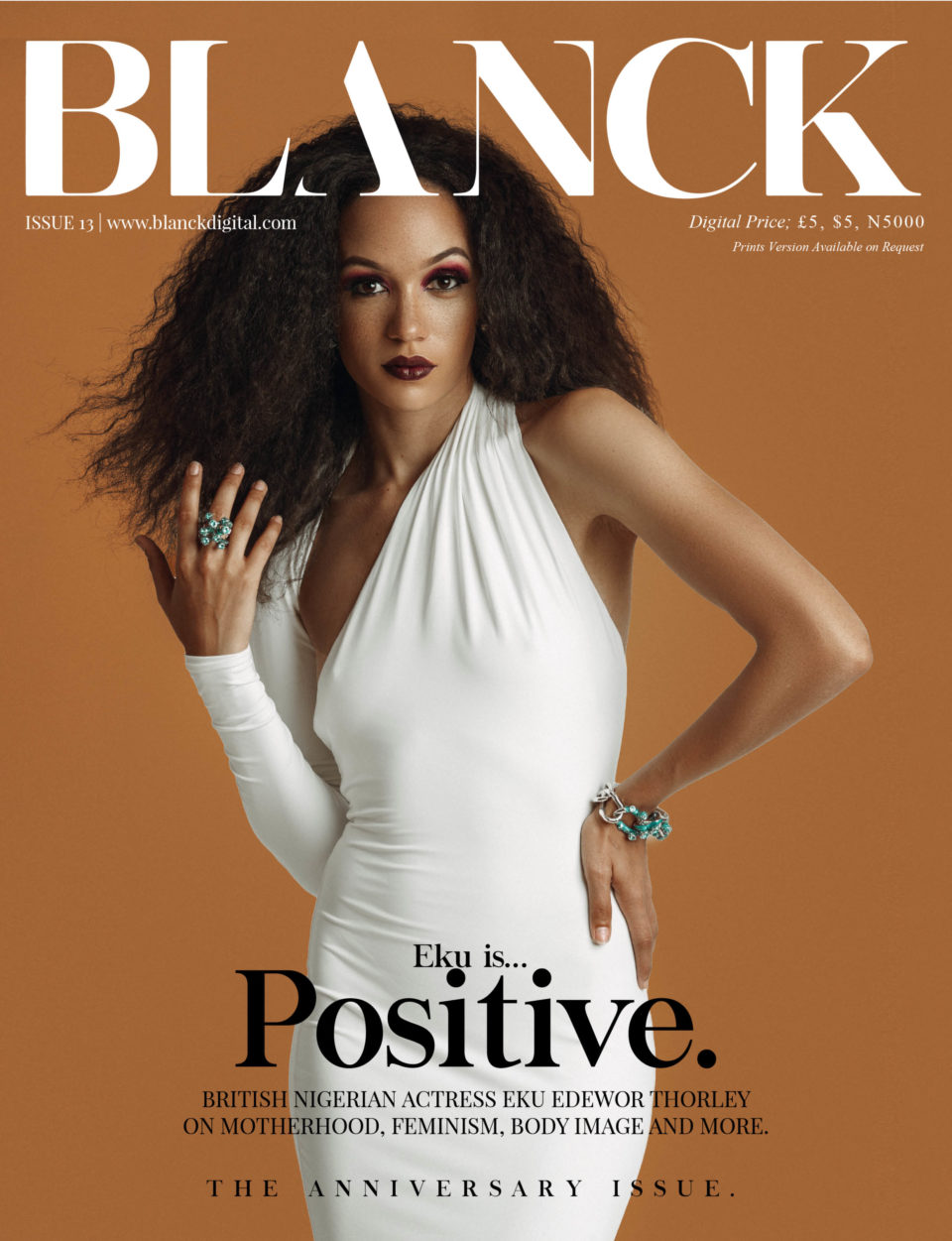 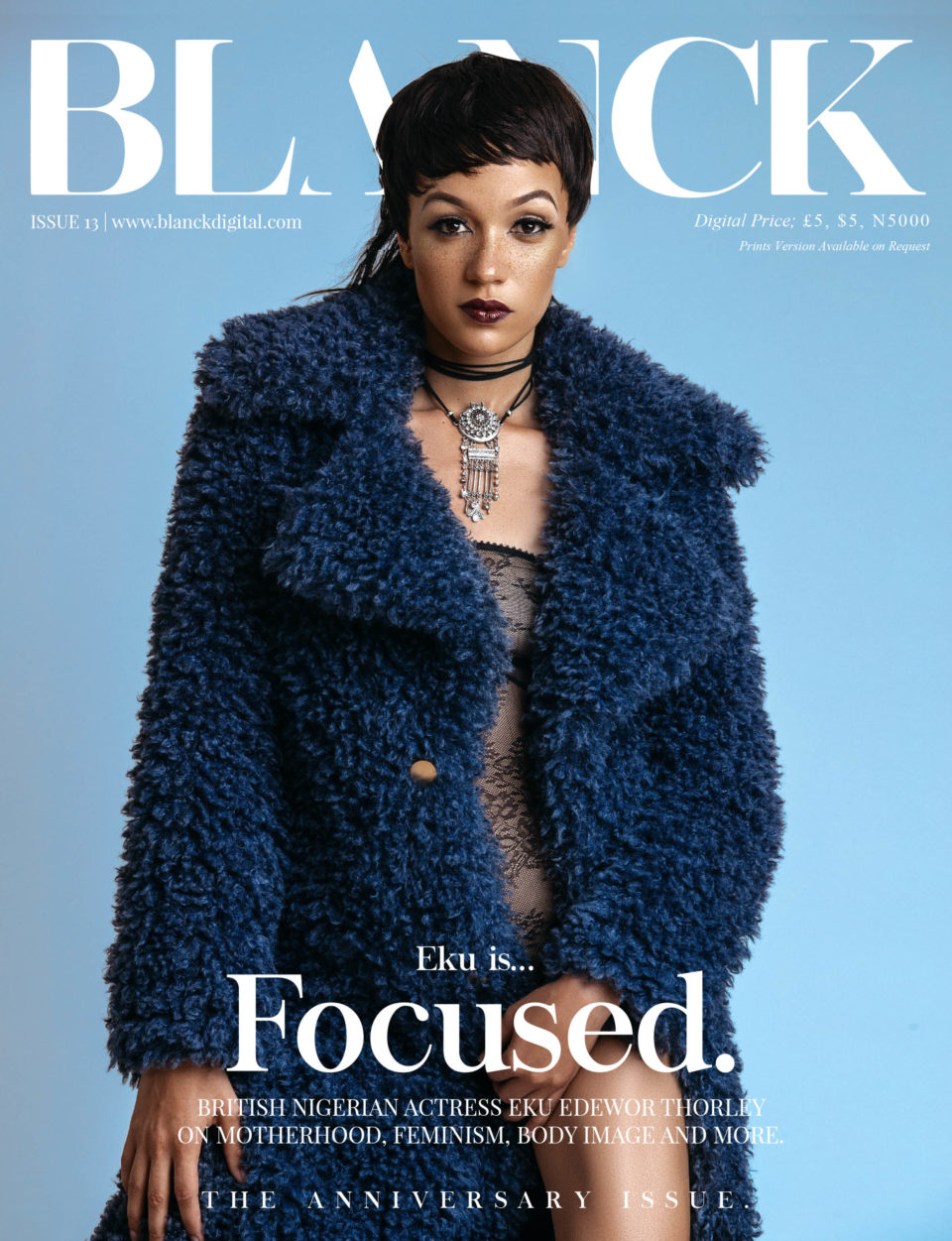 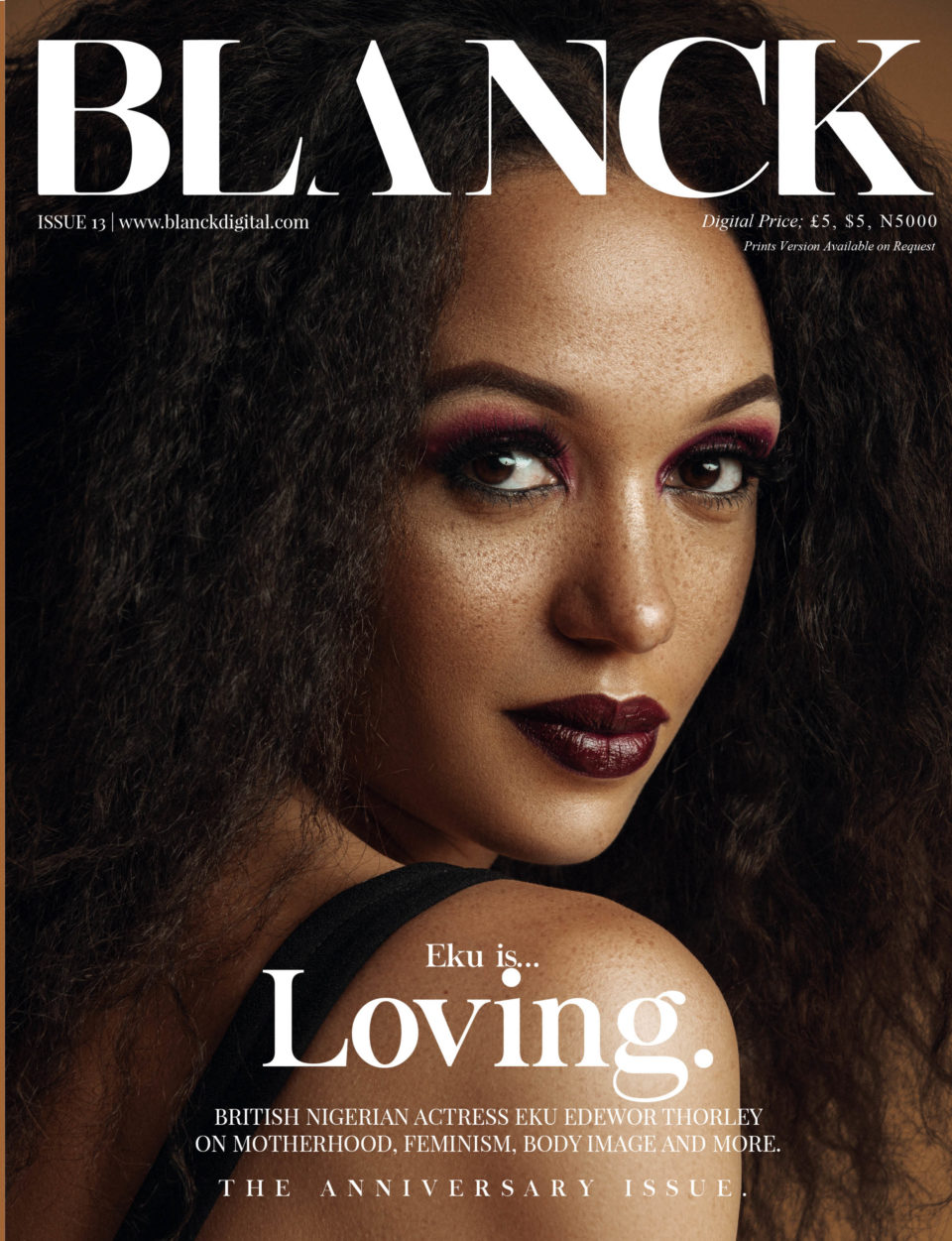 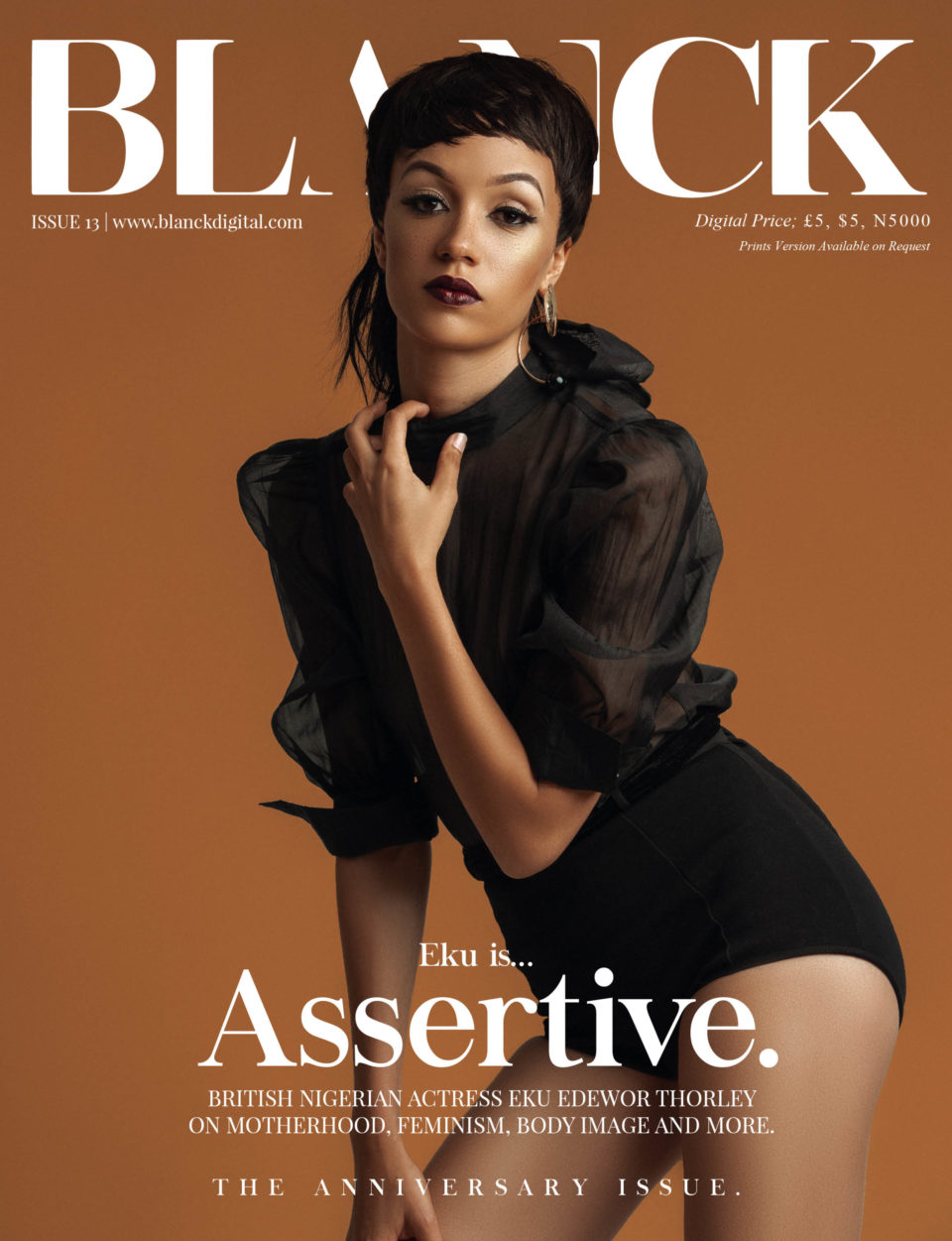 For this anniversary edition, the versatile, super-talented British-Nigerian Actress & TV Presenter, Eku Edewor Thorley, graces the cover of Blanck in a comeback fit only for a queen. As Blanck Magazine’s very first Cover Star from five years ago, Eku’s reappearance is both poignant and nostalgic as she speaks quite candidly on topical issues such as motherhood, feminism, body image and such.

Sharing her thoughts on life after becoming a mother she says“I don’t know if it’s just me, but I feel everyone goes through the moment where they don’t feel their work is valued and working in our industry particularly is very stressful. I was starting to feel a bit like, well what is really my role? But once I had my daughter, I experienced a sudden revival. I love what I do and somehow there was an urge to be a good example to this new human being. And I wanted to be able to say I never gave up on my dreams, you know. It makes you feel like living up to all the things that you want to live up to yourself. I feel like that’s what motherhood has done for me. It obviously also slowed me down in a way that… I can’t explain it. Because before, I felt like I was always rushing to do things, now I’m like I’ll do it if it’s right for me. And I don’t feel this anxiety like what if that job doesn’t come back”.

The editorials in this edition are bright, colourful and artfully juxtaposed with muted tones, eye-popping shades and intricate patterns in brilliant colours, filling the pages for creative enthusiast. From hot off shelves fashion to the best trends in beauty for the season and further, we have you covered.

Touching on the very pertinent subject of gender-based violence and the prevalent inequality between men and women is Dr Kemi DaSilva Ibru. Wig maker Gina Knight talks Black hair and balding in a personable piece and 19 for 2019 trailblazers serve more than a page’s worth ofinspiration.

New and interesting tips on interior decorating, luxury travel ideas, top summer reads, movies and food trivia wrap up the juicy contents of this anniversary edition where every page is a fashion promise kept.