“Next evacuation will be done on Saturday”- Prince Ben Okoli, NICASA President

The President of the Nigerian Citizen Association, South Africa (NICASA); Prince Ben Okoli, has stated the time for the next evacuation of Nigerians in South Africa after 188 were received on Wednesday.

He said; “We are busy doing the collating of names of intending returnees for the next flight. Hopefully, according to the consul general, the next evacuation will be done on Saturday,” 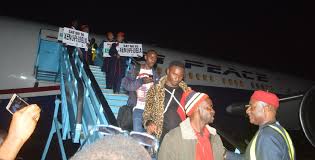 Meanwhile, it was recently reported that South Africa is frustrating the efforts of Nigerians have volunteered to be evacuated.

“My Wife Has Banned Me From Discussing ...