Energy, Light, Serena Williams and How JaneMichael’s KIMONO Made the Journey from Lagos to NewYork

At this same time, four years ago, I shared a post on my Instagram page about how Serena Williams inspires me greatly. I had watched one of her documentaries and broke down in tears as she radiated incredible self-belief – even as a child. In the documentary, she was asked the signature question “Who would you like to be like as a tennis player?” Her answer was “I will like other people to be like me”. I immediately saw the connection between Serena Williams and the JaneMichael story. This is quite familiar with the response I give when I am asked who I would like to be like. It makes me recall how I say I want to be a better version of myself but never denying that a few more also inspire me. If these people can do it, I can do more.

If you are well invested in the Nigerian fashion scene, you can understand the difficulties that come with running a fashion business in Nigeria. Many of these issues are not atypical from those of other businesses – poor electrical supply, an unstable economy and lack of capital. Other issues are specific to our fashion industry like inconsistent pricing, scarcity of fabric, piracy, cultural appropriation and the pure misogyny that comes with doing business in one of the few industries dominated by women
entrepreneurs. Yet, in spite of all these challenges, along with limited resources and impossible dreams, I still CREATE. Why? Because I consider fashion a calling to tell my story and do great things from Nigeria. My journey up to this point has confirmed this.

This was why when Serena Williams, my inspiration and one of the world’s greatest and most accomplished athletes of all time wore my KIMONO piece in the ESSENCE Magazine September 2019 ‘Global Fashion Month Issue’, it was clear that the universe was giving me a powerful wink of synchronicity. The Instagram post and tears of four years ago came full circle to give me further proof that my stars are aligning because the repeated omens of magical opportunities meeting preparation are just too powerful to ignore. It is not a coincidence that Serena, who has inspired me greatly, saw my piece, liked it and chose it as part of her outfit for the ESSENCE magazine shoot.

As all supernatural manifestations go, JaneMichael’s KIMONO made the most unlikely journey from Lagos to New York City. The JaneMichael journey started three years ago. Before this journey, I had always been a stylist. Many times, I created stuff on a set, transforming bare fabrics into dresses. The times when I needed to put fabrics together or use them for a red carpet event, I reached out to designers but they never really brought my dreams to reality. I still had to fall back to limited resources and work with what I had. For the perfectionist in me, those experiences were dissatisfying. Another thing was the lack of recognition I got for the work I did. While some of the designers only recognized me as the stylist, some others never gave me any credit at all. This gives a calling to the misplaced priorities that have denied stylists the credit they deserve even when styling is the foundation of fashion. Stylists create the entire look; they make the products buyable and will help you sell your products. They are the core business in fashion.

A lot of times I felt burnt from the lack of credit, but I kept on because my job was not about the tags and the mentions, it was more about the quality that I was giving back. For me, my satisfaction doesn’t
come from the money; it comes from my client’s satisfaction which is why I insist on honest feedback after my service. Sometimes I go as far as insisting they tell me the things they were not satisfied with so I can work better to improve on my service. After seven years as a stylist, my journey into designing was birthed when a designer disappointed me and saw nothing wrong with it. I remember him saying he went to work out. That, for me, was the last
straw that broke the camel’s back as I did not want to go back to creating looks out of improvisation. I felt I had gone past the stage of making excuses for people at the detriment of my reputation.
Although I did not have sufficient funds, I converted my living room into a workshop and started with two sewing machines. From one staff, I was able to employ two more to create a team of four.
I was so eager to tell my story that whenever I had an opportunity, I would not mind dropping all I had to do at that moment and going an extra mile to do the work just to be heard. I did this relentlessly
holding on to the belief that my story will be heard one day as long as I stayed tireless and consistent. At that time, I was not so eager about money; rather my passion was giving value, and still is.

In my quest, I was intentional about the calibre of people I wanted to tell my story through. However, I realized that I am the only one who can tell my story better. No one tells your story better than you. They were times I was frustrated, teary, weary, suicidal and delusional. No one understood my drive, but each time I was about to give up, stories of Mark Zuckerberg, Oprah Winfrey, Ellen DeGeneres and Mo Abudu spurred me to say “one last try.” In one of my many “one last tries”, I had an episode where I was crying, hitting the table and almost breaking stuff out of frustration. I kept asking myself, “When is the ‘one last try’ going to pay off?”
In 2018, I met visual artist, Laolu Senbanjo at an event in Lagos, we connected, became friends and I made him a pair of Ankara pants without taking his measurement. I can brag about telling one’s size from just looking at pictures as long as the image is not altered.

Early this year when I visited the US, I reconnected with Laolu. Remarkably, during that visit, I received an email that I had been selected among the top five hub managers to represent Nigeria at a British Council creative programme. I had to cut short my visit and return to Nigeria, which was after I had agreed to make another piece for Laolu.

I had once created a KIMONO which was named ‘Energy God’ after my friend cum client, Do2dtun. The piece was made with a mind of sending energy and light to the wearer because I know that no matter
how strong some people think we are, we get weak. We need the energy to keep on going and light to see the path before us I thought to make one for Laolu as a significance of sending energy and light to him. He loved the KIMONO piece and went further to put his art on the lapel of the jacket. During the ESSENCE shoot, Serena Williams saw the piece and chose to wear it amongst all the other numerous options she had to pick from. The KIMONO is indeed captivating – you know why? It is captivating because there is a story behind it. You can only connect with it more when you have a story.

Laolu’s exquisite face painting of Serena synced seamlessly with JaneMichael Kimono to create an amazingly beautiful and fierce image of Serena. The result is quite spectacular. 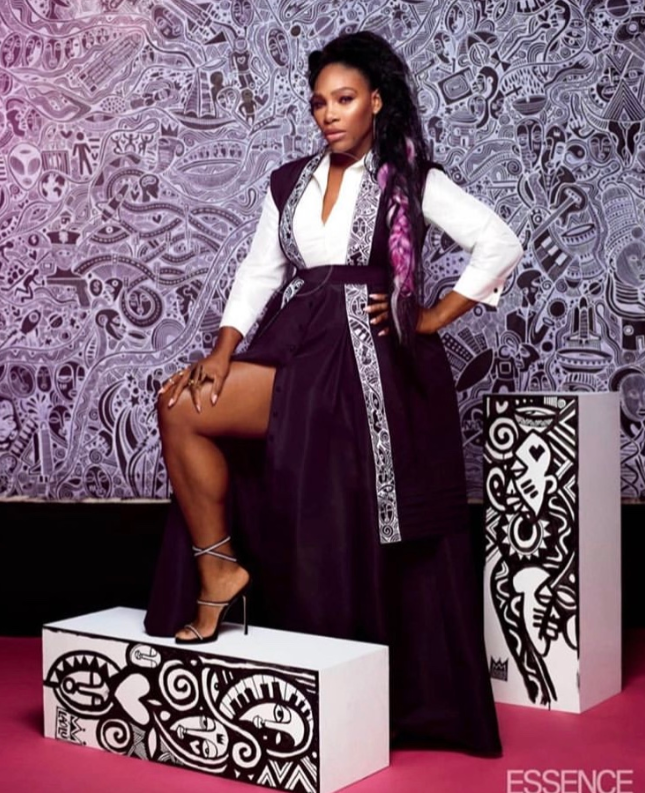 Seeing my work pay off in this manner has reassured my belief to give no compromise to value and quality because JaneMichael is timeless, audacious and beautiful. One of my mentors, Mai Atafo once brought to my attention that I usually give credit to people who are not as deserving but me. He spoke about a maxim that says, “Every designer is a stylist but not every stylist is a designer.” He then said, “Jane, search the world and tell me who has done this successfully?”

As I thought about it, he added: “You are the only one who has successfully made this adage a fallacy; there is only one you.”
That day, I drove back home with tears rolling down my cheeks. I was hoping the tears were good enough to wash away the mud in my eyes so I could see clearly. It was at this point I started digging deep into finding myself and gradually unveiling myself like an onion. The words of Ituen Bassey (one of Nigeria’s leading designers) about me being “very powerful” when I curated the fashion show for President of France, President Emmanuel Macron during his visit to Lagos in 2018 made more sense to me.

This was an opportunity I got based on merit and the Managing Director, Samuel Onyemelukwe ofTrace TV Naija, who organized the event, confirmed this. No wonder CNN referred to me as a “stylist to
the stars” in my CNN African Voices feature. Further recognition from the US Consulate in Nigeria came when I was invited to speak about ‘Redefining Body Image and Defeating Anxiety.’ This brings me to the understanding that there is no fallacy in doing well what is worth doing as my dad
taught me. And just like Serena in her ESSENCE interview, the biggest joy for me is that I am doing something I have always wanted to do, living the reality I have always dreamed of and birthing values that are artfully stitched into my brand.
In my journey, I have always been curious. The more questions I asked the more answers I found. I have sieved out the crumbs, my circle also became smaller and I understood values and purposes more. As I
expanded my values, I gained more clarity on the possibilities of creating wealth. I hope to bring attention to Nigeria in a positive light. Just as there are a lot of unpleasing stories about us, there are a whole lot more world-changing stories in Nigeria.

Yes, I’m Jane Michael Ekanem, a widely accomplished fashion stylist, fashion designer, educator and creative, and I’m ecstatic to have this as an additional badge. It is no mean feat for one of the world’s
most photographed woman to dazzle in my piece in a global magazine. 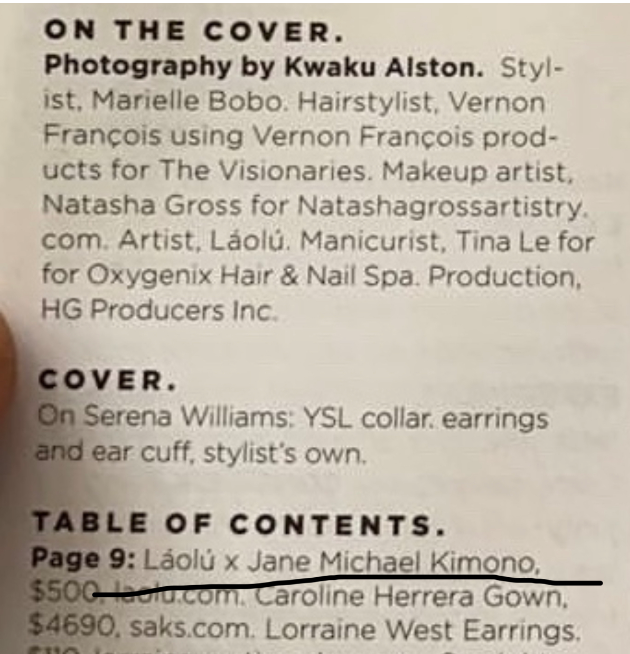 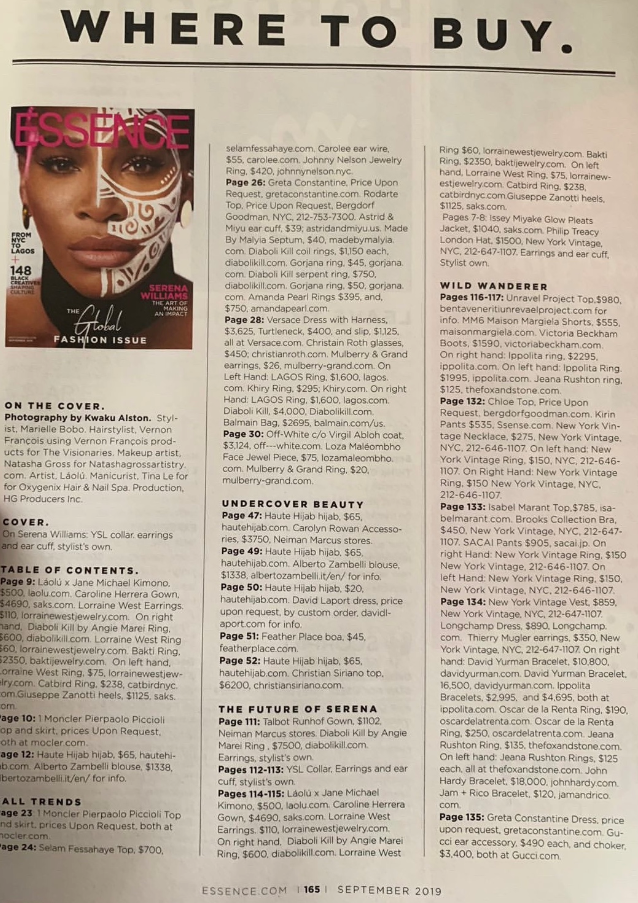