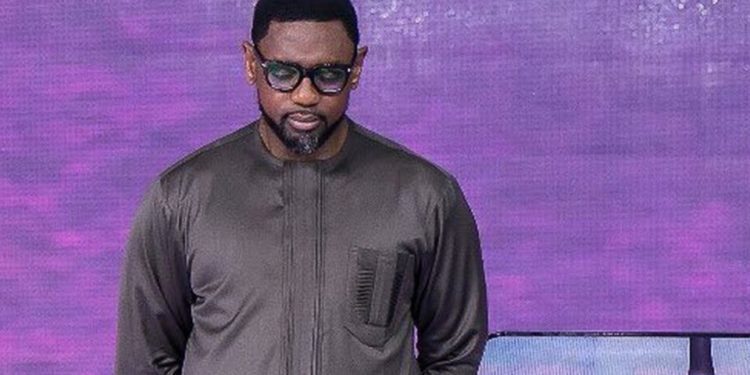 Popular Nigerian singer Timi Dakolo and his wife, celebrity photographer, Busola Dakolo held a press conference today, Sunday, July 21, 2019, in Lagos, to speak on the recent events concerning rape allegations levelled against Dr Biodun Fatyinbo, Senior Pastor of the Commonwealth of Zion Assembly (COZA) Worldwide.
In a video interview released by YNaija TV on Friday, June 28, 2019, Busola Dakolo accused Fatoyinbo of raping her when she was a minor.

Timi Dakolo addressing members of the press said “an attempt was made to abduct my wife”, claiming that she was trailed home by the policemen.
He also mentioned that one of the officers told his wife “oga is in the car and he wants to speak with her” which made him suspect that the armed policemen were at his home to deliver more than a letter.
Dakolo said he and his wife had written a petition on June 27, 2019, over the alleged rape of his wife by Fatoyinbo. “The petition was filed at the office of the AGP, Alagbon, Ikoyi.
“The AGP personally assigned the file and personally asked for an expedition action to investigate the case” stated Timi Dakolo. This was before the video was released.

“We had since been to the police station on several occasions on the invitation of the police to respond to various questions in the course of the investigation” he further mentioned that
“We were therefore shocked to have been invited to Abuja when no visible action was taken to interview Mr Fatoyinbo.
“As far we know, Mr Fatoyinbo has not been questioned on the strength of my wife’s petition even after several invitations by the police” said Timi Dakolo at the press conference.
The invitation letter which wa signed by Deputy Commissioner of Police, IGP Special Tactical Squad, Force Headquarters, Kolo Yusuf. The letter ordered the couple to show up in Abuja and report for interrogation on Wednesday, July 23, 2019, by 10 am.

According to Timi Dakolo, he and his wife were accused of “criminal conspiracy, falsehood, mischief and threat to life.”
The singer stated that he has not threatened anyone and falsehood and mischief are not criminals under Nigerian law.
The actions of the Nigerian Police Force were criticized online and drew reactions from Amnesty International and the First Lady of Nigeria, Aisha Buhari.
Now, the petition of the Dakolos and Fatoyinbo will be moved to Lagos according to the singer.
“We acknowledge the efforts of the Nigerian police that our confidence in our impartiality and professionalism, in this case, will not be shaken,” said Timi Dakolo.
Speaking about some criticisms that he and his wife have received since the interview came out, Dakolo said that they are not fighting the church.

“This is not about fighting the church, no one can fight the church. When one pastor leaves another will show up. God will build his church and the gates of hell will not prevail.
“The people Jesus criticized the most were church people, the Pharisees and the Sadducees. It has never been about the church.
“Christians should know the difference between a sin and a crime” remarked Dakolo.
Furthermore, he said that “Anybody can decide to tell their truth whenever they are ready to tell it. It is when you have the strength you can tell it. Rape is not an adjective. It doesn’t define anybody. ”
At the press conference was Nollywood actress Kate Henshaw who spoke about how we can no keep quiet about the culture of silence regarding rape.