Eko4Show: The Extravagant Lives Of The ‘Bling Lagosians’ 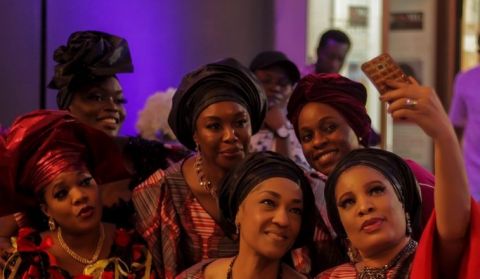 Lagos is known for its promotion of the extravagant and flamboyant lifestyle. As much as the hustle is real, so is the party life. The constant and consistent need to keep up with this way of life is what drives many towards their means of livelihood.

Perfectly depicting this way of life; Bolanle Austen-Peters released a blockbuster titled; ‘Bling Lagosians’. The movie borders around the flamboyant lifestyle of Lagosians and the ever increasing need to fit into the upper class; “The 1% of the  1%”.  The 100-minute movie is packed with comedy, suspense, as well as deep philosophies. In its average length running time, the movie managed to pass across diverse messages including; Honesty, Integrity, Discipline and also determination. The movie also breaks the generic cycle with its inclusion of fresh screen actors such as; Elvina Ibru, Jimmy Odukoya, Sharon Ooja who is also popular for her role in Ndani TV’s Skinny Girl in Transit. Other cast members include; Alex Ekuboh, Gbenga Titiloye, Monalisa Chinda Coker, Bisola Aiyola, Bamike Olawunmi, Denola Grey, Broda Shaggi, Jide Kosoko, Helen Paul, Toyin Abraham, Osas Ighodaro Ajibade, Tana Adelana.

Speaking on the Inspiration to pull together the masterpiece, Bolanle Austen-Peters said; “I wanted to do relatable stories. We don’t need to import ideas. This story came to me from observing our lifestyle. I wanted to draw some lesson. It is essentially about decadence, excess, lust, greed and opportunity”.  Some of the cast members present at the press viewing commended the effort of the director in putting together such a movie with a great storyline portraying the real Lagos life.

The financial backbone of the project, and Executive producer, Chris Ubosi who confirmed that there would such collaborations in the future, also added; “Yes. I have always been interested in the arts. When Bolanle spoke to me about this years ago, it was natural we would come up and the finished product is beyond what we had thought”

Corporate brands such as Ecobank and Amstel Malta were also a part of the success of the movie, as the Brand manager of Amstel Malta; Mr Josiah Akinola confirmed; “We are really proud. We are looking forward to more productions from you. If there would be a sequel, we would love to be a part of it”

The ‘Bling Lagosians’ had its premiere on Sunday 16th June and would be in the cinemas from the 28th of June, 2019.

Annie – The Musical! A SPAN production