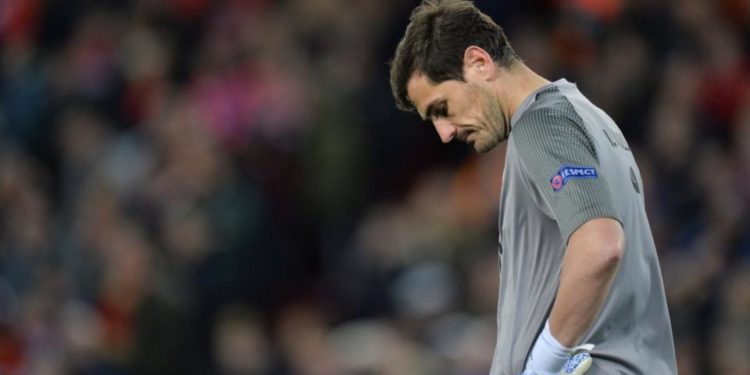 Porto’s Spanish goalkeeper Iker Casillas is in hospital after suffering a heart attack at the club’s training center.

In a statement, the club said: “Iker Casillas suffered an acute myocardial infarction during morning practice this Wednesday, at the PortoGaia Sports Formation and Training Centre, in Olival,”

“The work session was promptly interrupted so that assistance could be given to the FC Porto goalkeeper, who is at this moment at the CUP Porto Hospital. Casillas is fine, stable and with his cardiac problem resolved.”
A heart attack, or acute myocardial infarction, occurs when a part of the heart doesn’t receive enough blood.
Casillas won the World Cup with Spain in 2010 and spent 16 seasons with La Liga giant Real Madrid, winning three Champions League, before moving to Porto in 2015.
He was also part of the Spanish team that won the World cup and two European Championship.
He currently holds the record of most career Champions League appearances with 177.
Share
Tweet
+1

‘We Need To Talk About Substance Abuse’ ...