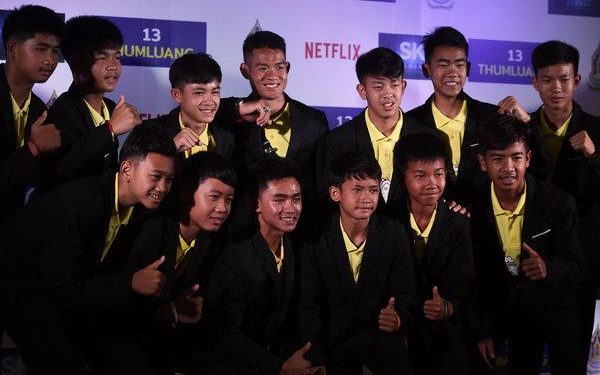 The twelve Thai boys and their soccer coach who were trapped in a flooded cave last summer will soon have their story on Netflix after they signed a deal with the online streaming giant.

Assistant coach of the soccer club, Ekkapol Chantapong said the team was grateful for the opportunity.

“We are grateful for the opportunity to thank the people and organizations from Thailand and around the world who came together to perform a true miracle, by retelling our story,” he said.
“We look forward to working with all involved parties to ensure our story is told accurately, so that the world can recognize, once again, the heroes that made the rescue operation a success,” the coach added.
Members of the ‘Wild Boars’ soccer team also posed for a photo alongside their coach during a press conference in Bangkok to announce their deal with Netflix.
Last month, Netflix announced that he was partnering with the production company SK Global Entertainment, which produced the romantic comedy “Crazy Rich Asians,” and a Thai government venture to help with the team’s right.
The mini-series is expected to be directed by “Crazy Rich Asians” director Jon M. Chu and Thai director Nattawut “Baz” Poonpiriya.