Have you ever wanted to learn specific aspects of photography from your favourite photographer? Now is the time to have a one on one with them for a very little cost at the master class during the Business of Photography Conference set to hold on Tuesday, April 30, 2019 at Landmark, Event Centre, Lagos.

The maiden edition which took place on Tuesday, April 24, 2018 opened its doors to over a thousand participants who learnt all about the basics of the business of photography, the challenges and the solutions as well as access to micro finance to scale in business. This year the event doors will open at 8 am and end at 9 pm. The conference would feature five segments; the Opening, the Conversation (panel session), Break out time (master classes), Cocktails/Networking and Exhibition. 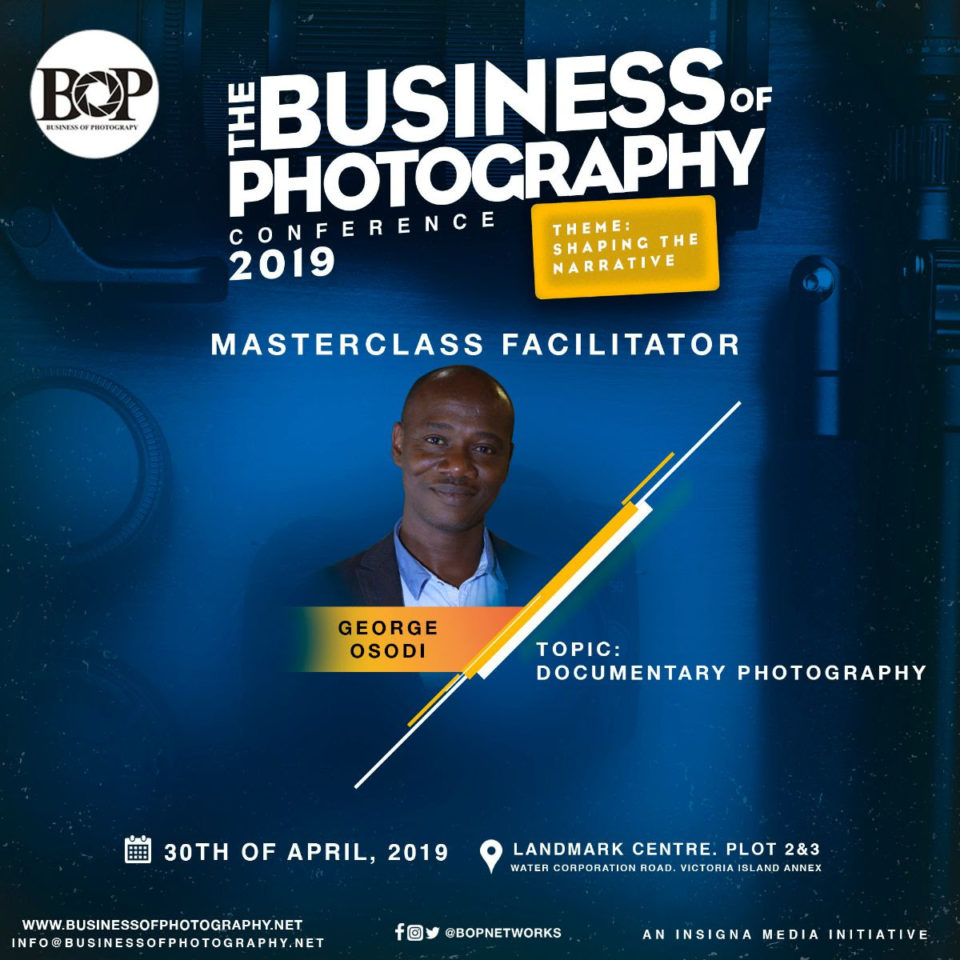 George Osodi is an award winning internationally acclaimed Nigerian Photographer. His photographs range between photojournalism and artistic documentary, and he has worked on various photography projects globally with his works exhibited in several Museums, Biennial’s and in institutional Art Spaces, such as Documenta 12 in Kassel, Germany 2007, a Participant of the 2015 Venice Architectural Biennale, as part of the Canadian Pavilion.

A first prize winner of Fuji Africa photographer of the year 2004, and winner of a Sony world photography award 2009. He participated as a juror of World Press Photo competition in 2016.  Osodi’s works are in the collections of various Museums around the world. 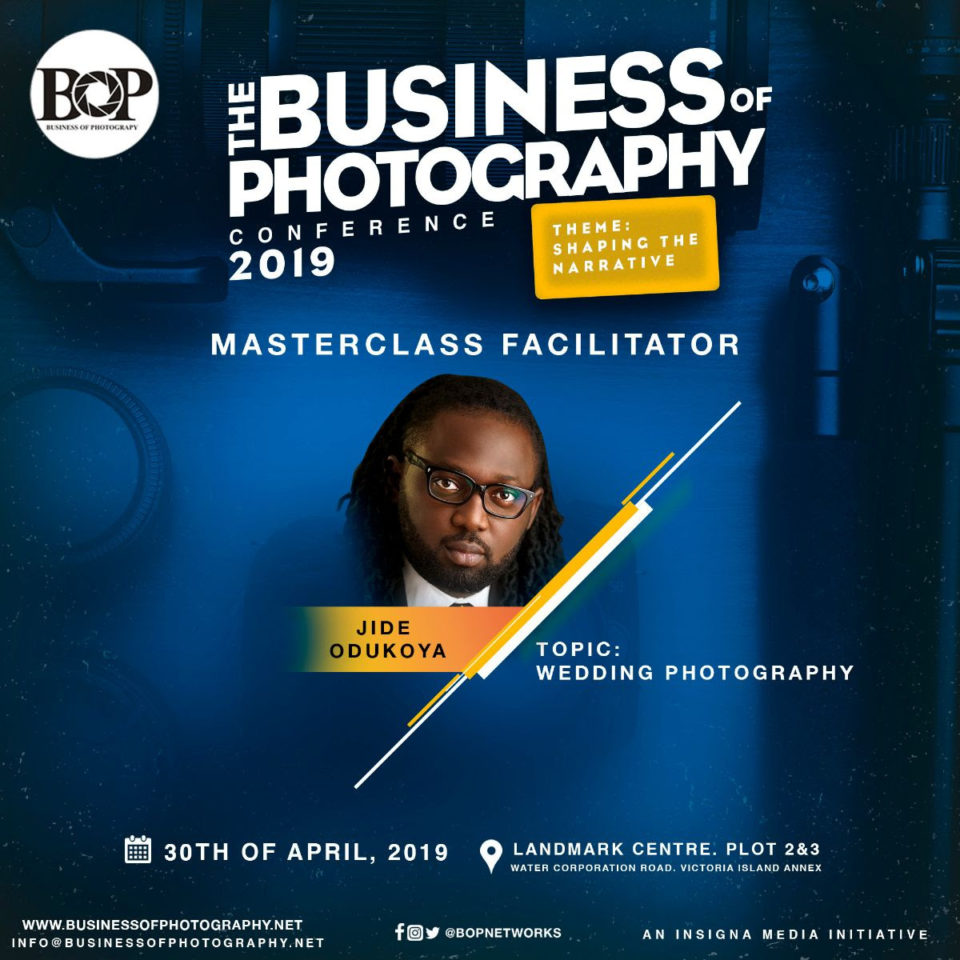 Jide Odukoya is a self-taught Nigerian Artist and Photographer who started photography in 2011. His first photographic pursuits were on the streets of Nigeria, including cities such as Lagos, Ogun, Ibadan, Ekiti, Benue, Uyo, Calabar, Enugu, Abuja and Port Harcourt. Popularly known for his wedding photography works, he is known to have worked with some of the best and biggest event planners in the country. Aside weddings, his photographic style also spans through Documentary, Portrait, Lifestyle and Commercial works. In 2011, he joined the Invisible Borders Team on a road trip from Lagos to Libreville where he made several photo stories of the African people.

He is an alumnus of Lagos Business School (EDC Program) and currently heads JOPSTUDIOS.

Jide Odukoya lives with his wife and partner Morayo Odukoya and their Twins El-Elyon and El-Nathan, He currently lives and works in Lagos, Nigeria. 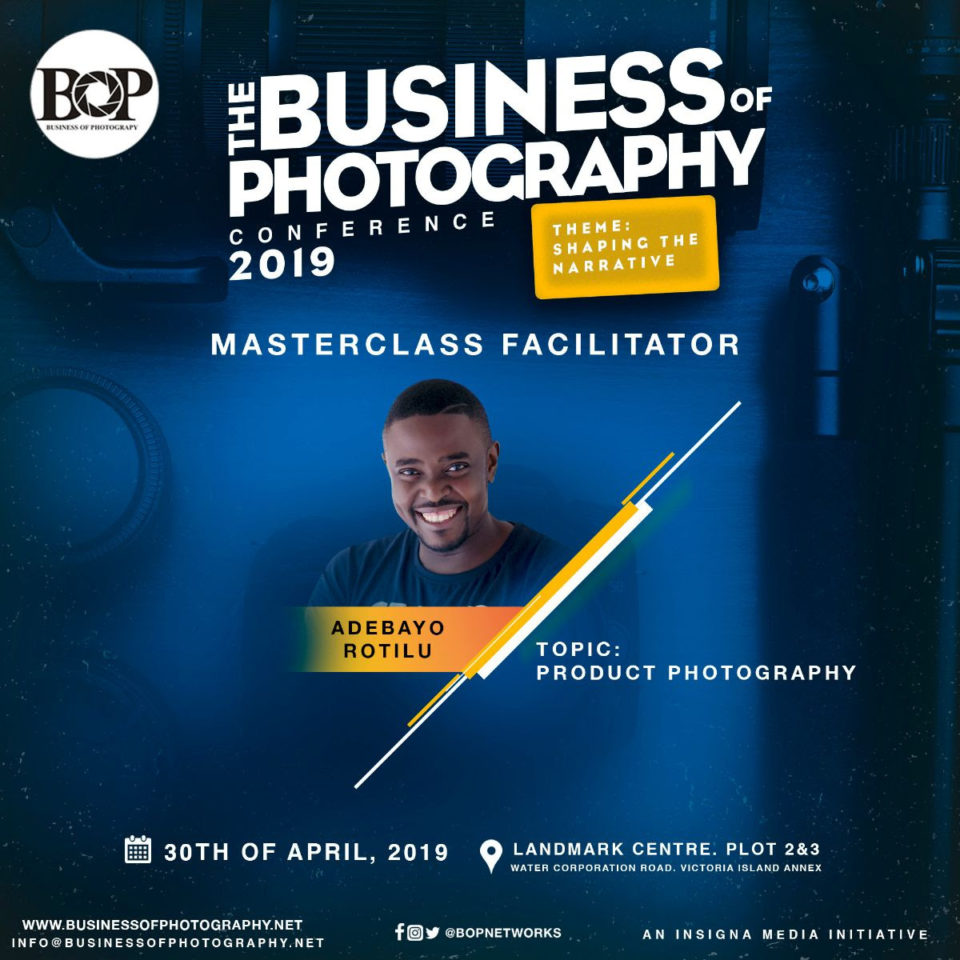 Adebayo Rotilu preferably called ‘Debayo’ is a Full time Product and Commercial Photo-Artist based in Nigeria.

He’s got an Educational background in Computing and Project management with an MSc from the University of Glamorgan UK. He is the founder and the Creative Director for TWELVE05 IMPRESSIONS (A subsidiary of TWELVE05 PHOTO FACTORY) a company founded out of his passion for the Art and Science of Photography.

His journey began in 2012 when he searched for African images online and only saw images of poverty, chaos and anarchy; images which lacked visual appeal. He has since contributed immensely to the African cultural and business gallery and works with creative agencies and directors to bring their visuals to life.

Debayo has been involved in a number of Photography Projects over the past decade, some of which include: Diageo Nigeria, Nigerian Bottling Company, Eat N Go Nigeria, Standard Bank South Africa, House of Tara, Nasco Group, FMN Group (Golden Penny) So Fresh Nigeria and many more. Other brands he has worked with include, James Cubit Interior Architects, TW Magazine. 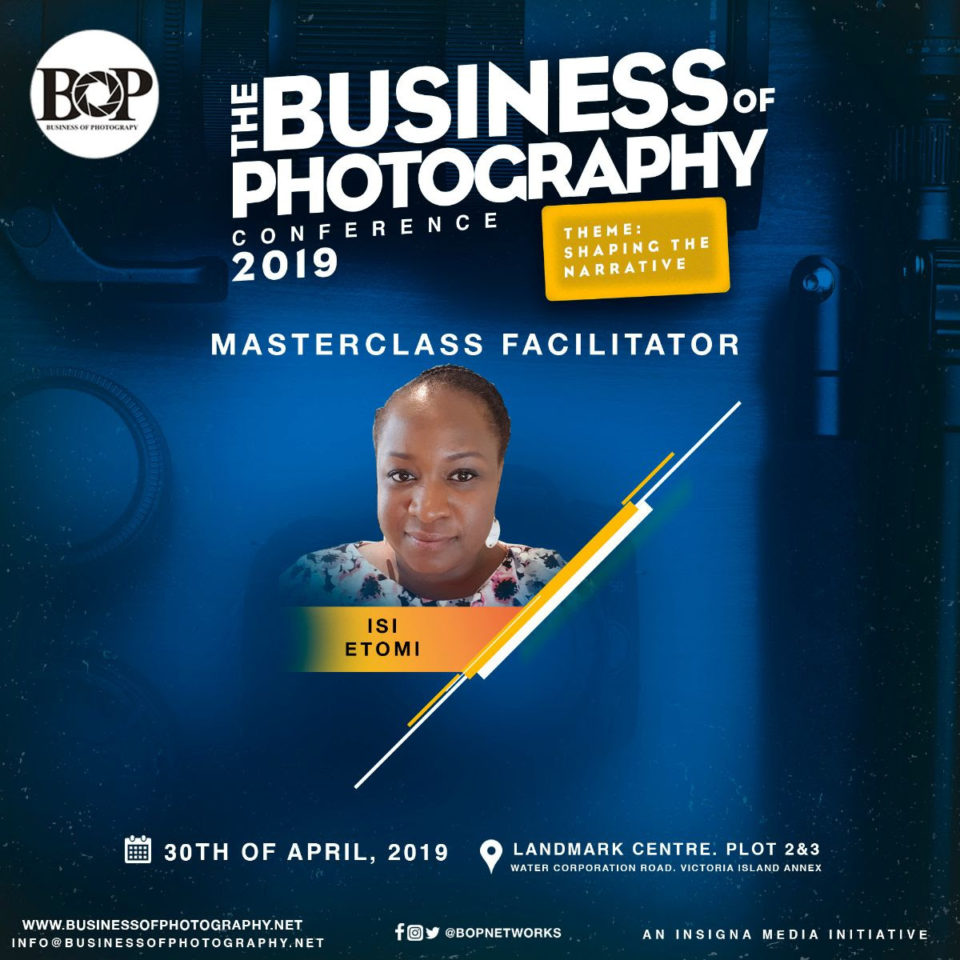 Isi Etomi is a qualified architectural designer with 10 years of professional experience in technical and architectural practice. She joined James Cubitt Architects Nigeria in September 2009 and has subsequently prepared schematic designs and construction packages for a number of architectural and interior design projects of varying scale (in both Lagos and Ghana) concentrating on the restoration and redesign of existing commercial and office spaces. Clients include financial institutions and telecommunication industries amongst others.

Having worked in architectural practices since 1999, she is experienced in projects at all stages including interior/exterior design, construction and detail design, project synthesis and presentations from concept to on?site supervision. She has also been team?leader on a number of projects executed in the exhibition, museum, financial and commercial sector and has sound knowledge in conversion and restorative projects.

At Purcell Miller Tritton, she worked on projects from concept through to schematic design and supervised construction. A significant project she worked on was the transformation of the round reading room at the British Museum into an exhibition space for the Chinese Terracotta Warriors.

She has developed an enthusiastic, creative, dedicated work ethic, focusing on quality, clarity, organization and meeting project deadlines. Isi is a self-confessed perfectionist, paying close attention to detail and strives for impeccable results.