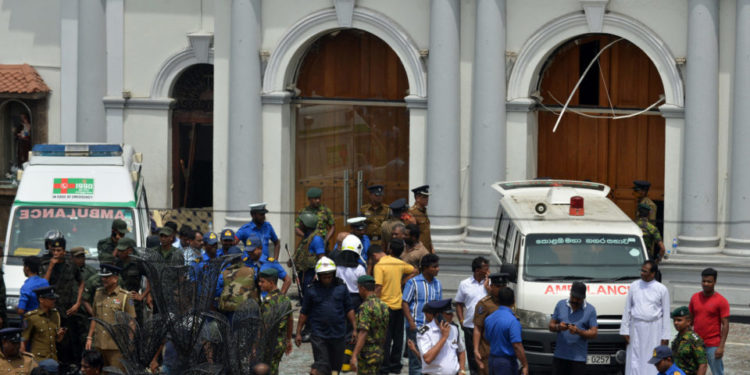 A string of blasts ripped through high-end hotels and churches holding Easter services in Sri Lanka on Sunday, killing at least 156 people, including 35 foreigners.

Images shows the serious damage done by the attacks, including churches where roofs were blown out and splintered woods littering the floor, as hundreds of wounded flooded into local hospitals.

Prime Minister Ranil Wickremesinghe called the attacks as “cowardly” and said the government was trying to contain the situation.

No groups have claimed responsibility for the blast but there are reports that Sri Lanka’s police chief Pujuth Jayasundara issued an intelligence alert to top officers 10 days ago, warning that suicide bombers planned to hit “prominent churches”.

According to AFB, the alert message reads:

“A foreign intelligence agency has reported that the NTJ (National Thowheeth Jama’ath) is planning to carry out suicide attacks targeting prominent churches as well as the Indian high commission in Colombo,”

The NTJ is a radical Muslim group in Sri Lanka. The group was also linked to the vandalisation of Buddhist statues last year.

The first blast went off at St Anthony’s Shrine, a Catholic church in the capital Colombo.

A second deadly explosion then went off at St Sebastian’s, a church in the town of Negombo, north of the capital.

“A bomb attack to our church, please come and help if your family members are there,” read a post in English on the church’s Facebook page.

Not long after, another explosion was confirmed at a third church in the town of Batticalo

Have You Heard? Olamide Has Just Been ...

Olamide Shuts Down ICM As He Announces ...