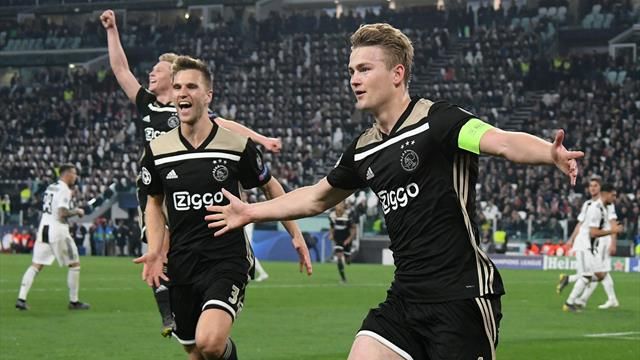 Both teams played out a 1-1 draw at the Netherlands.

The Dutch side lived up to their moniker as giant killers after also seeing off Real Madrid in the last round of the competition.

They had famously overturned a 2-1 deficit to win 4-1 at the Santiago Bernabeu.

Their latest win meant they stopped the Italian champions from reaching their third Champions League final in five seasons.

And they had to dig deep to achieve that.

Ronaldo, who signed for 100 million euros ($117 million) last summer from Real Madrid opened the scoring in the first half with a header from a corner, and Juventus looked like they might just go on to see off their spirited visitors who also had to make an early change after Noussair Mazraoui went off injured.

The home cheers were silenced a mere six minutes later, as Van de Beek rolled the ball past Szczesny in goal.

And it was Szczesny that kept Juventus in tie for large period of the second half.

There was nothing the Polish could do to stop De Ligt towering header in the 67 minutes.

THE BUSINESS OF PHOTOGRAPHY CONFERENCE 2019: MEET ...