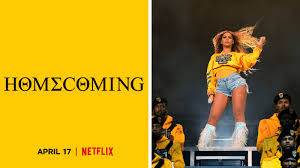 Netflix has made announced in a trailer and press release, Beyonce’s documentary  “Homecoming”  an intimate look at Beyoncé’s historic 2018 Coachella performance that paid homage to America’s historically black colleges and universities. The film is set to be available from April 17.
The film will be “interspersed with candid footage and interviews detailing the preparation and powerful intent behind her vision,” Netflix added.

The Grammy-award-winning singer made history at Coachella last year as the first black woman to headline the annual festival.