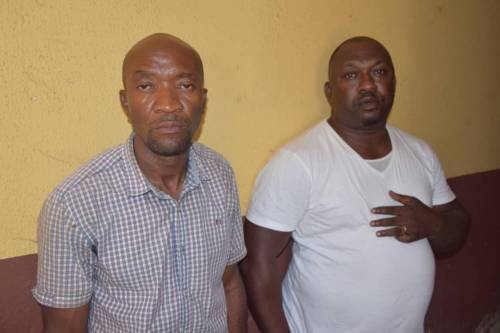 The Lagos State Police Command has revealed the names of the officers accused of shooting Kolade Johnson.

The police disclosed the names when they paid a condolence visit to the family of the deceased.

Kolade Johnson was killed by a stray bullet during a shooting by officers of the Anti-Cultism Unit of the Lagos Police Command.

According to the statement by the Police Public Relations Officer, Lagos State, DSP Bala Elkana, the entourage that visited the family includes DCP Ayuba Elkanah, DCP Mohammed Ali, DCP Yetunde Longe and other senior Police Officers from the Command.

They were received by Alhaji Remi Lukman, head of the family, in their residence at 1, Beco Street, Onipetesi, Mangoro.

During the visit, the Police said they have apprehended the men suspected to have carried out the shooting, and revealed their names as: (1) Insp Ogunyemi Olalekan and (2) Sgt Godwin Orji attached to Anti-Cultism Squad.

Head of the Kolade Family expressed his gratitude for the visit and commended the CP for taking steps to expose those behind the shootings.

“I thought it is going to be a one man’s fight but seeing the Police High Command joining our family in this fight has shown that justice will not only be done to Kolade, but to the entire Nigerian youth. I am glad that we have a new police force which believes in justice.” he said.