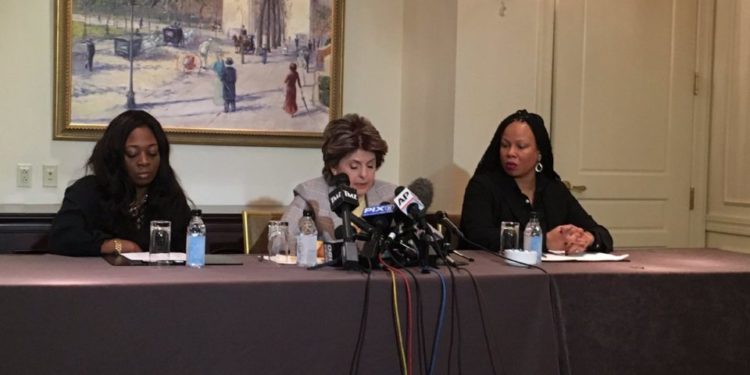 Both women gave a press conference on Thursday and said they were compelled to come forward  “in order to encourage others who may have been victimized by him to come forward.”

Their lawyer, Gloria Allred said the singer used his fame to manipulate the women, who were teenagers at the time. She also said it fits into what she called an  “alleged pattern” of singling out vulnerable “teenagers.”

The women, Latresa Scaff and Rochelle Washington said they were teenagers when they they first met Kelly in Baltimore in the mid 90s. They said they later attended a party where they were allegedly offered cocaine, marijuana, and alcohol.

“At the time I thought meeting a celebrity would make me be happy but in this case it didn’t,” Washington said Thursday.
“I just wanted to have fun . . . I could never forget that day. I can’t get it out of my mind, what I saw and what happened.”
They also showed reporters photos of both of them with with LL Cool J, who was reportedly also a performer at that night’s show as well as a separate photo showing the women at the after-party.

Both Scaff and Washington say they are willing to testify under oath.