Golden Movie Awards Africa, is an embodiment of glitz and eminence. The maiden edition was held on 27th June 2015 at the State Banquet Hall, Ghana. Undeniably, it has grown to be one of the best if not the best awards schemes on the continent attended by the “crème de la crème” of the movie industry. With an outstanding record of putting up an excellent show annually, this year’s event slated for 1st June, 2019 at the Movenpick Ambassador Hotel promises to be even more exciting and captivating. This will be the last edition to be held in Ghana until (we meet next time/ only fate can tell/ who knows when ,so don’t be left out of the most credible and Prestigious Awards in Africa…. So don’t miss a second of the 2019 GOLDEN MOVIE AWARDS AFRICA!!!

Submissions for the 5th edition of the GMAA’s are being accepted till March 21st, 2019.

To submit entries for review, send your forms and films:

Please read the rules and regulations before proceeding to completing your submission.

Official rules and regulations are available on the website including application forms for download. Films that meet the spelt out criteria can make an entry for consideration.

Entries must be submitted (signed) by the owner of the film or the authorized representatives of the owner with respect to the rules. 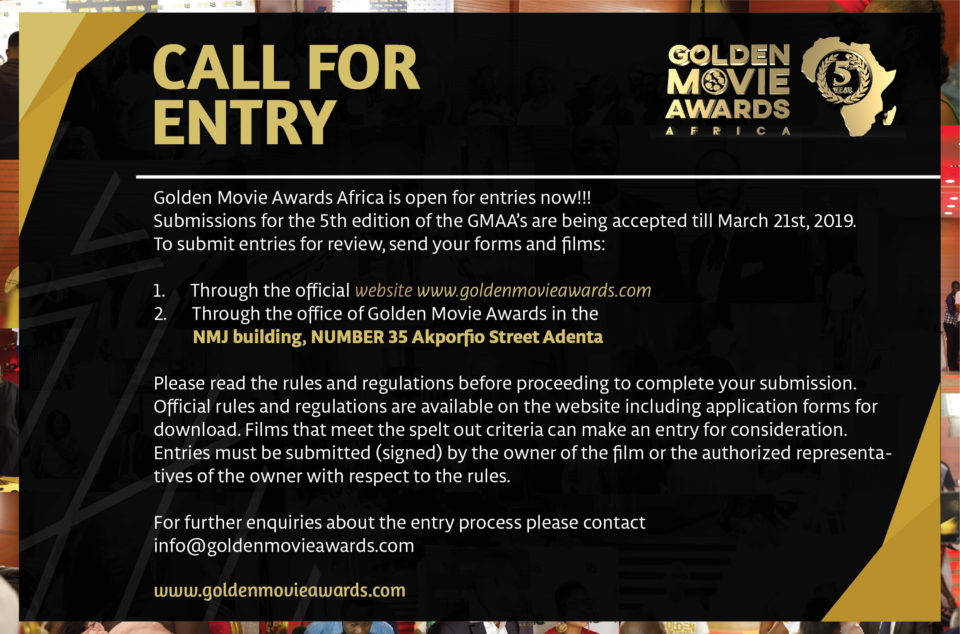 WHAT IS REQUIRED OF THE FILM MAKERS

The Golden Movie Awards Africa meticulously assesses each film and screenplay submission, reaching a final consensus based on a set of subjective criteria and requirements.

We are looking for original, wise, brave, eye-opening and creative productions that capture and illuminate the pulse and the people.

The film’s Authorized Representative must agree to all Conditions of Entry detailed herein, and submit their film, to the GMAA office, by March 21st 2018. Only films that meet the following conditions may be chosen for possible nominations in the Official Selection.

A complete application forms signed by the Authorized or the Approved person.

A link to a Vimeo online screener. Your link must be active until June 2nd, 2019.

The DVD must include “burned in” English subtitles if English is not the original language of the film; without the subtitle the film will be disqualified

A copy of the complete screen credits as they appear in the film;

A short synopsis of not more than 500 words or less of the film in both official languages;

The Board of Directors and the Grand Jury may chooses to rejects any film that may infringing on the rights of others (e.g. Religion, Politics Gender and any other social vices) Each film invited to be part of the Official Selection by the Board of Directors will receive a Certificate of Participation.

Films that have been produced during the qualifying period.

Films that respect the aims of the awards as defined;

If participating in the “short film” category, films that do not exceed 45 minutes in length, including credits.

A list of current home addresses, phone numbers and e?mails of each individual entered for consideration is crucial in order to notify nominees in adequate time to receive their Certificates, Award Ceremony tickets, etc. Production Company addresses are not acceptable;

In the case of multiple individuals entered in one Category, the first person listed will be considered to be the person designated to receive the statue and be the designated spokesperson;

In the event of the overall Best Movie of the Nomination, the Entrant will permit at least one public screening of the Movie in the major cities of the country.

It should not be assumed that any tactics or activities not specifically addressed by these regulations are acceptable. The board is willing to review any materials or answer any questions that arise in advance.

‘City Must Win Champions League To Be ...