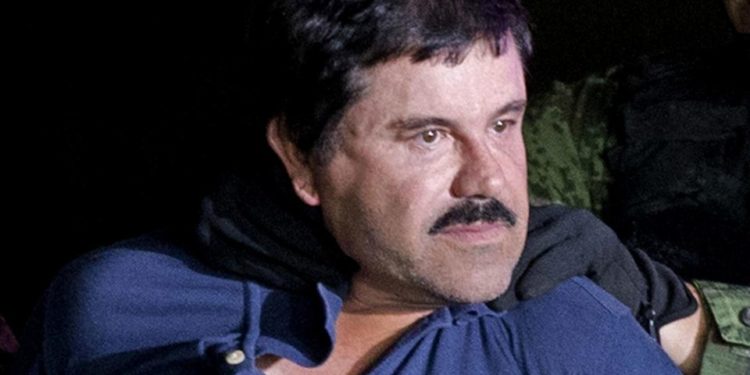 Drug Kingpin Joaquin ‘El Chapo’ Guzman has been found guilty of drug trafficking into the US., as boss of the Sinoloa cartel.

After six days of deliberations, the jury convicted the 61-year old, who has been standing trial in Brooklyn since November and faces life behind bars.

The verdict came after 34 hours of deliberations that the defence had thought would end in their favour. Before the verdict. Guzman’s attorney, Eduardo  Balarezo tweeted a photo of a pistol shaped Mexican tequila bottle and added the caption: “For after trial.” The lawyers even bump fists and hugged after the first week of deliberation ended without a trial.

After the deliberation, and as he was being led out of the courtroom, his wife flashed him a thumps up and nodded at him.

At a press conference, the defence team were less upbeat and admitted they were perhaps too confident, but that Guzman remained “strong” despite the convictions.. “He’s cool as a cucumber,” one of the lawyers said, and added that they planned to appeal.

The US. attorney general, Richard Donoghue said the convictions comes with a likely sentence of life in prison without possibility of parole.

He will be sentenced on June 25.

During the trial, several criminals and several members of the cartel, after securing deals with the prosecutor testified against Guzman, although the defence tried as paint them all as liars. His lawyer said: “They may be liars. They may be killers. They may be degenerates, but they’re not stupid,” Lichtman said in summations. “This trial is about one thing and one thing only—getting Chapo. Everyone wants the famous Chapo.”

At a point, they even said he was being framed and made a scapegoat because of his profile and that the leader of the cartel is  Ismael “El Mayo” Zambada, who is still wanted.

His speech obviously didn’t sway the jury who eventually convicted his client.

Further testimonies also exposed the extent of Guzman’s power and how the cartel had bribed their way to some of the highest levels of the Mexican government. They also painted Guzman as a murderer who had no qualms about sacrificing human life to defend his criminal enterprise.

One of the most important aspect of the proceedings was how he was captured – using the technology he created for the cartel. Guzman had commissioned an encrypted communications network for his team to evade authorities,. Unfortunately, the IT specialists that built the network flipped and gave the US authorities key access to the encryption key which authorities used to intercept messages and then built evidence of his drug trafficking.

It was this that led them to know how he smuggled the drugs into the US. He used planes, trains, cars, and submarines—and even smuggled hundreds of millions of dollars worth of cocaine across the U.S.-Mexico border by hiding the drugs in jalapeño pepper cans.

Ten Questions to ask on your Valentine’s ...