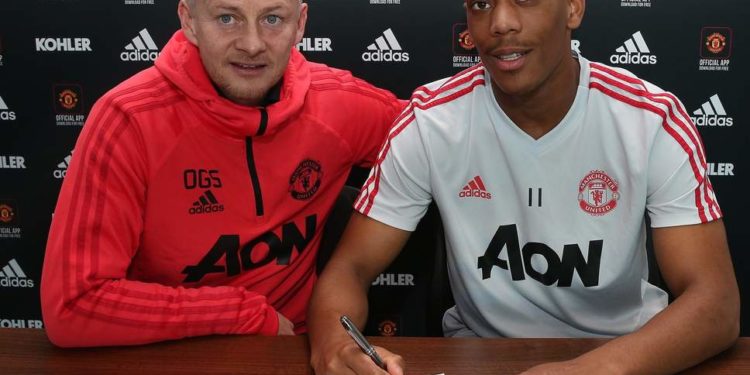 Anthony Martial has extended his contract with Manchester United until 2024 with months remaining on his contract.

The 23-year-old moved to the club from Monaco in 2015 for £36 million ($47 million) and was at the time the most expensive teenager in football.

Speaking to the official site, he said:

“I am loving my time at this club,” said Martial, whose new deal includes the option to extend for a further year.

“From the day I joined I have been made to feel part of the United family and I have been incredibly humbled and overwhelmed by the warmth and love of our fans, who continue to amaze me with their support.

“I would like to thank (interim boss) Ole (Gunnar Solskjaer) and his coaching staff for their belief in me and for helping me to take my game to the next level. This club is all about winning trophies and I am sure the next piece of silverware is not that far away.”

Martial was set for the exit after falling out with ex-manager, Jose Mourinho who fined him for failing to return to the club’s pre-season tour of the United States following the birth of his second child. He was subsequently kept at the fringes of the first team.

He has been an integral part of Solksjaer team since the former Manchester United striker took over from the sacked Mourinho.