Just days after former President, Olusegun Obasanjo released a statement condemning the Buhari adminstration and equating it to the Abacha era, both men have met at the Council of State meeting in Abuja.

This is the first time both men would be meeting since the statement was released and Buhari’s administration shot back too.

In a statement titled ‘Points for Concern and Action’, Obasanjo accused the Buhari Government of trying to rig the election and intimidation and shutting of dissent.

He also said the country was back to the era of former dictator, Sani Abacha.

The Presidency replied and accused the former President of trying to play God. They also said they would teach Obasanjo and the Peoples Democratic Party (PDP) a political lesson in the forthcoming presidential elections.

At the executive council meeting though, both men were seen smiling and shaking hands. 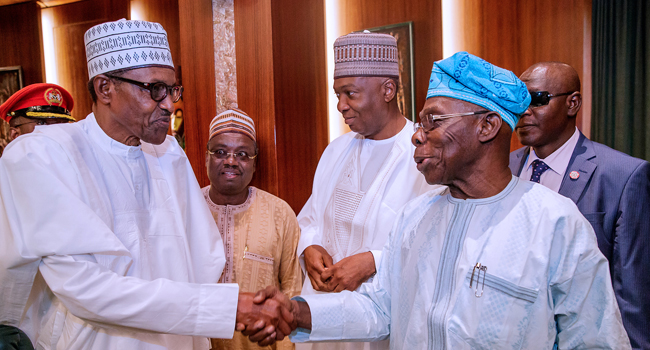