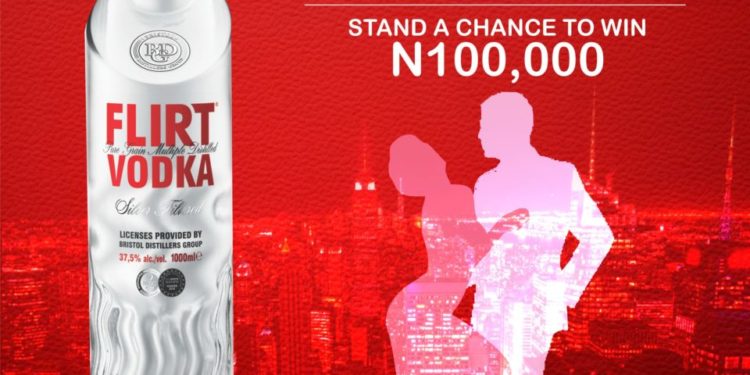 Popular Vodka drink, Flirt Vodka, has announced the beginning of a campaign to reward consumers while giving them an opportunity to have fun and win amazing prizes. The original Bulgarian Vodka, through its Nigerian Distributor, Ekulo International Limited a leading company in the FCMG industry is giving out prizes during this Yuletide season to appreciate its consumers.

The campaign started gaining viral attention when viral trend setter Charles Okocha a.k.a Igwe 2Pac posted his participation video on social media and hundreds of others joined the trend. The challenge aptly named ‘Flirt with me’, is designed to bring young people together in a fun and friendly way. Consumers are asked to post a video on any social media platform while flirting with a member of the opposite sex using the hashtag #Flirtwithme for a chance to N100,000, gift items and other amazing prizes. Prizes will be given to videos with most interesting concept and likes. Entry closes on 31 st January 2019.

Speaking on the reason for the campaign, the Marketing Manager of Ekulo International Limited, Mr
Emeka Oramadike said “Flirt Vodka represents the energy, uniqueness and exuberance that young
people represent, and we are using this season to appreciate everyone and to let everyone know that
Flirt Vodka will continue to bring smiles to the faces of Nigerians”. It should be noted that since it’s
entry into the vodka market of Nigeria, Flirt Vodka has continued to be the favourite vodka for most
Nigerians because of it’s richness and affordability.

The #Flirtwithme challenge according to Ekulo International Limited is expected to last for 2 months
while over 15 winners will emerge. Follow them on IG @flirtvodka_ng Facebook: FlirtVodka.Nigeria