Understanding Emery’s Tactics And How It Affects Ozil 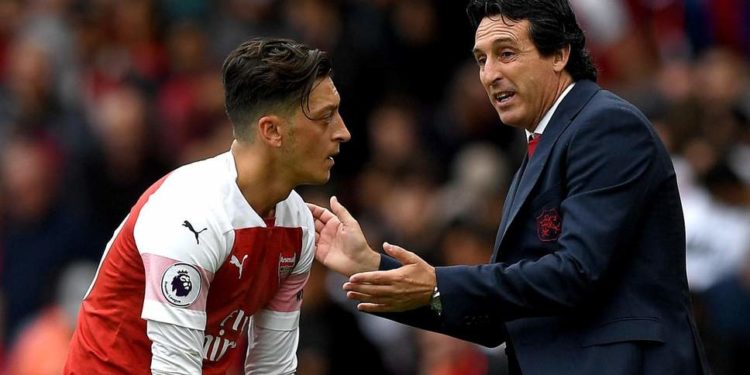 Emery’s Arsenal face Liverpool later today in a game that should test Emery’s new team’s mettle away to a top 6 team and Liverpool’s credentials as potential invincibles. Yet it is Emery’s decision to leave Ozil at home that has taken over the headlines and overshadowed what should be a tasty affair.

There were signals that Emery’s tactical inflexibility was always going to clash with Ozil’s need for freedom on the pitch but the hard turn of events has made the relationship unattainable for both of them, and threatens to derail Arsenal’s whole season if something is not done fast.

Much has been said about Emery’s tactics and how it doesn’t have a role for any player that will be a passenger both defensively and offensively, so Ozil’s absence can be justified.

How true is that.

Emery has tried a variation of formations this season – 5-3-2; 4-4-2,3-4-1-3, and even 4-4-2, yet for most of the games, Arsenal have struggled to control the game, even against teams who were ready to concede possession and sit behind the ball. Arsenal’s lack of control is why the team is struggling defensively, even against teams with average offensive capabilities despite fielding a trio of defensively minded midfielders. Arsenal’s current defensive frailties are system created and isn’t all down to the defenders. Arsenal are conceding chances at a record rate, more than the team’s average over the last 20 years.

Emery prefers a narrow formation that favours Bellerin or the fullbacks advancing the ball, or the deep lying playmaker, Xhaka preferably, employing long balls up-field, bypassing the entire midfield. And it makes sense, somewhat, as Arsenal’s conservatively minded Central midfielders are too deep to connect the midfield to attack, so the team has to either attack using width, or just play the long balls. Unfortunately, this leaves no room for a player like Ozil. That was evident against Brighton too. Ozil was missing for most of the game because the trio of Xhaka, Torreira and Guendouzi were simply too deep and were unable to get the ball to him quick enough for him to make any difference in the game.

It is simplistic to think a player of Ozil’s offensive brilliance is being benched because of defensive duties. The reason is more complicated and has little to do with Ozil’s form or lack of it, and more to do with Emery’s preferred system (which is a defensive approach) or the fact that he doesn’t trust Ozil for one reason or the other. And he played the same system at Sevilla and PSG too, except in those places, he used real width by using a LCM on the wing with both Nasri (Sevilla) and Di Maria (PSG) who join the midfield and act as a third CDM without the ball.

At Arsenal, it’s the fullbacks that provide the width, so they are always high up the pitch, which restricts Xhaka to a deep role to act as a fourth defender (in a three man defence) to slow the opposition’s attack and wait for the fullbacks to return. Problem is, with Xhaka too deep and Ozil not on the pitch, or too far ahead, without someone to link him up, Arsenal lack real technical quality in the middle of the park, and it creates a hole opposing teams take advantage of, hence why Arsenal look vulnerable without the ball despite the addition of Torreira and Sokratis. Torreira is maybe one of the best signings of the summer but I think Arsenal fans overstate his technical ability. He is a great ball winner, probably even world class at it, but his world class ability doesn’t really extend to passing and Guendouzi is still too raw and inexperienced to consistently do that and make the right decisions everytime.

So is there room for Ozil in this system?

Yes, because Arsenal once played this same system three years ago, and with Ozil in devastating form. Infact, the narrow system Emery currently favours is a bit identical to the Arsene Wenger team that paired Carzola and Coquelin, and had Ozil in the hole. Coquelin prowled the field trying to win the ball back, while Cazorla created from deep and linked the midfield and the attack. But it was ozil that dictated where Arsenal went offensively, either by receiving the ball and then releasing Giroud or Sanchez who acted as a second striker, or just pointing at where the ball should go once in the final third. It meant, Arsenal didn’t need to make use of width that much and then rely on cut backs from full backs to create chances. And they were more unpredictable and were easily able to control games at will.

So, it seems the system and Emery’s current adherence to it is at the middle of it all. Arsenal needs someone capable of linking defence and attack and the team inability to do that, or the coach’s unwillingness to use someone that can do that (Ramsey) is at the center of the whole problem. And it is not just Ozil that is being affected by the rigidity. Iwobi has fallen victim too since the injury to Bellerin and Kolasinac, who were the ones he was linking with the most, rather than the strikers. His loss of form is tied to that than to anything else.

The system isn’t without its ups though. The directness and conservative approach is great against tops teams who will look to win the game,giving Arsenal space to ping the ball behind, something, Aubameyang, in such great form, will fancy. Infact, I wont be surprised if Arsenal grind out a result against the in form leaders. The current Gunners set up is perfect for teams like Liverpool. Problem is when the same system is preferred against teams that are set up deep.

Now, the questions Arsenal have to ask themselves is whether the System is worth sacrificing two of their best players for, or whether if Emery is worth tweaking the Club’s brand and philosophy for. PSG thought he wasn’t and what the decision of decision makers at Arsenal will be telling.