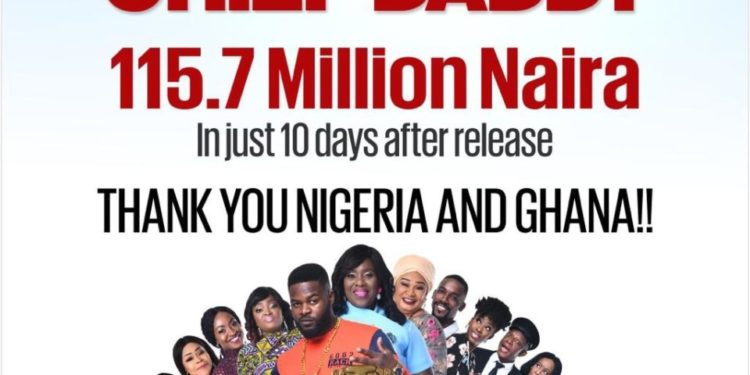 Lagos, December 24th, 2018. EbonyLife Films is once again leading the Nigerian box office, as its latest movie, Chief Daddy, amassed a whopping N115,789,661 in ticket sales in the first ten days of release. The NiyiAkinmolayan film opened in cinemas on Friday, December 14th and has since maintained the number one position for local movies in the box office chart, in Nigeria and west Africa.

Also, Chief Daddy garnered the attention of the Vice–President, Professor Yemi Osinbajo, who announced on Friday that he would be at the Genesis Deluxe Cinema, Abuja to view the movie with young Nigerians. News of his attendance, as well as a declaration of free movie tickets for the screening, caused the internet to go into a frenzy. The vice-president, in a tweet from his verified Twitter handle, could be seen enjoying the movie and conversing with the amused viewers.

Tagged ‘a must-see movie for the holidays’, Chief Daddyhas received a remarkable 97% approval rating from Google users and lots of glowing reviews from viewers exiting cinemas around Nigeria. This is the fifth consecutive number one movie for EbonyLife Films, following Fifty, The Wedding Party, The Wedding Party2 and The Royal Hibiscus Hotel.

Chief Daddy is showing in cinemas across Nigeria and in Accra, Ghana.