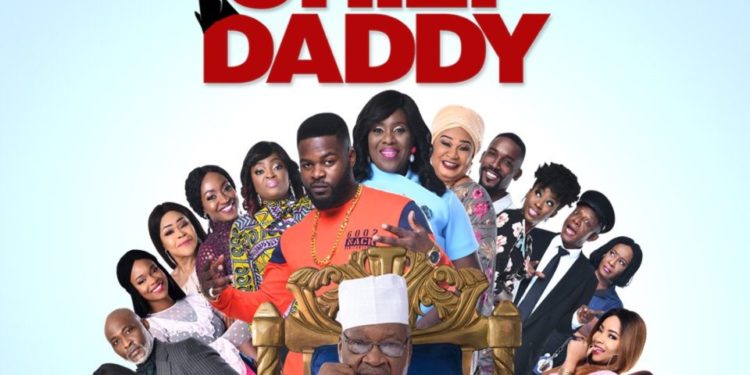 Lagos, December 17th, 2018. Over the weekend, the new comedy from EbonyLife Films, Chief Daddy,debuted in cinemas across the country. The much-anticipated movie got off to a superb start, selling over N40 million worth of movie tickets in its first three days of regional release.

Although these figures exclude advance and private screenings, Chief Daddy is currently the number onefilm in Nigeria and west Africa. The movie has taken the top spot, surpassing ‘Mortal Engines’, ‘Robin Hood’ and ‘Creed II’. The movie chalked up the second-highest opening weekend for a Nollywood film in 2018 and the third-highest-ever opening weekend for a Nollywood film. This makes it the fifth consecutive number one feature from EbonyLife Films, following Fifty, The Wedding Party, The Wedding Party 2 and The Royal Hibiscus Hotel.

The N42.6 million debut has Chief Daddy officially surpassing The Wedding Party, Nigeria’s highest grossing movie, which had a N36 million opening weekend. The dramatic comedy is on course to deliveran impressive N70 million in its first week and up to N200 million before the year ends. The movie, which features the finest of Nollywood’s talents, places NiyiAkinmolayan as the first film director to have twonumber one movies in the same calendar year (The Wedding Party 2 and Chief Daddy).

Moses Babatope, COO of FilmOne, distributors of Chief Daddy, is elated at the news. “Chief Daddy maintains Nollywood’s 12 consecutive weeks of dominance at the top of the Nigerian box office since September 28. What looked like a very lacklustre year for Nollywood is proving to be one of the strongest years ever for the industry. Congratulations to Mo Abudu, Ebony Life Films, Niyi Akinmolayan, and the cast and crew for this wonderful performance.”

Weekend moviegoers have been giving Chief Daddy good reviews, which bodes well for the film’s continued success through the holidays.

ASUU Walk Out Of Meeting With Federal ...