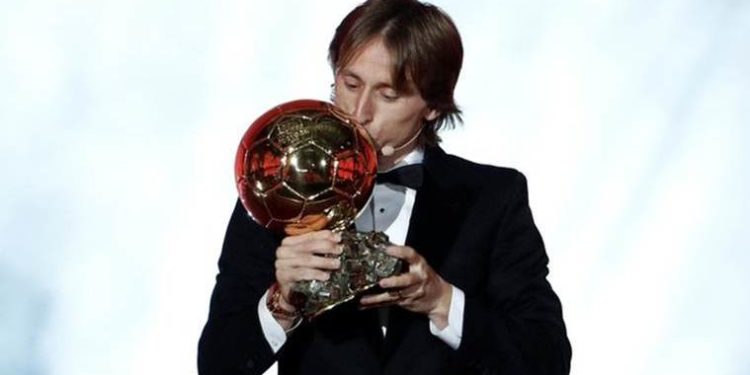 Croatian and Real Madrid midfielder, Luka Modric has won the 2018 Ballon d’Or, becoming the first player other than Lionel Messi or Cristiano Ronaldo to win the award in over a decade.

Real Madrid and Croatia midfielder Luka Modric won the 2018 Ballon d’Or, becoming the first player other than Lionel Messi or Cristiano Ronaldo to claim the award in more than a decade.

Modric, 33, won his third successive Champions League in May before helping Croatia to a first World Cup final.

Former AC Milan forward Kaka, was the last player other than Messi or Ronaldo to win it when he won it in 2007.

Speaking after the award, Modric dedicated it to other players who missed out on the award during the period Messi and Ronaldo dominated.

“Maybe in the past there are some players who could have won the Ballon d’Or like Xavi, Andres Iniesta or [Wesley] Sneijder but people finally now are looking at someone else,” he said.

“This award is for all the players who probably deserved to win it and didn’t. It was a really special year for me.

“It is difficult to express my emotion and how I feel in words. It is something unique for me. It was very special.”

Mbappe, 19, became the first winner of the Kopa Trophy – awarded to the best under-21 player and selected by former Ballon d’Or winners. and Lyon and Norway striker Ada Hegerberg won the inaugural Women’s Ballon d’Or

I actually thought I was poor: Why ...