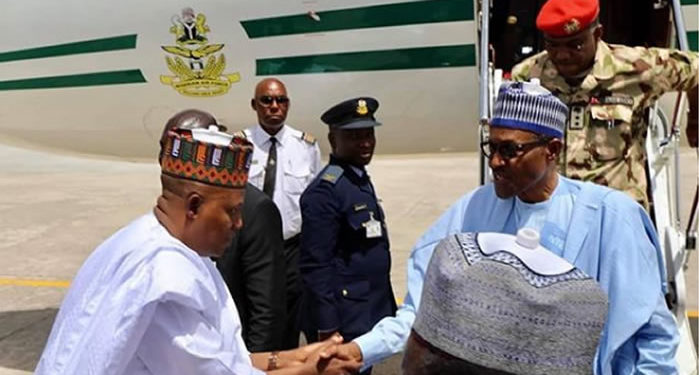 President Muhammadu Buhari is presently in Maiduguri, the Borno State capital for the Chief of Army Staff (COAS) conference.

The conference was earlier scheduled to hold in Benin, Edo State but was moved to Borno State over the Metele massacre.

Speaking at the conference, President Buhari stated that the Federal Government remains committed to ending military operations in the North-East adding that his administration would spare no effort in supporting the military achieve its task in the region.

“We remain committed to ending the crisis in the north-east and making the entire area safe for all. I urge you all to keep up the good work.

“I know that you are doing your job to reverse this trend. I want to assure you that no effort will be spared in providing the necessary support you require to complete your task.”

While speaking he expressed his regret that some military officials had to pay the ultimate price while fighting against Boko Haram terrorists.

He sympathized with families and relatives of the slain officers killed Boko Haram insurgents during an attack on their base in Melete area of Borno State about two weeks ago.

He further added that the war against terrorism is a must-win.

“I have been visiting some of our injured troops in the hospitals and I also spoke to others in their bases to assure them of our continued support.

“It is a must-win war. I want to encourage our troops not to be distracted but remain focused to the task of eliminating Boko Haram from the face of the earth.

President Buhari is expected to meet troops of the Lafiya Dole at the theatre command fighting insurgency in the north-east region to boost their morale.

Buhari has held two different meetings with intelligence service chiefs at the Villa twice this week following the recent security situation in the country.