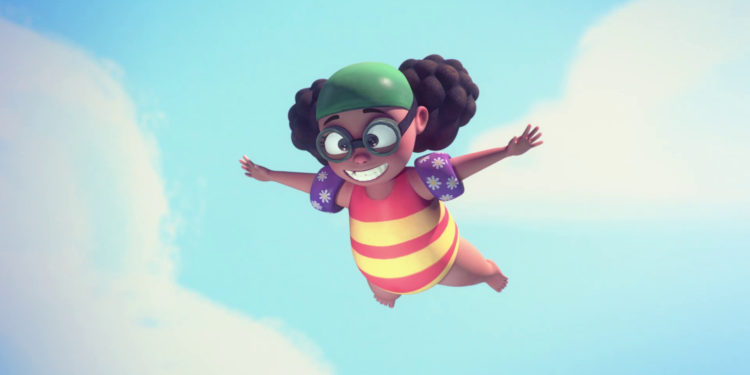 After winning seven international awards and screening at over 60 international festivals, Triggerfish’s short film Belly Flop is now on YouTube.

Directed by Jeremy Collins and co-directed by Kelly Dillon, Belly Flop is the story of Penny, a fearless young girl learning to dive, unperturbed by a talented diver who keeps stealing the spotlight.

The heart-warming short film was named Best Animation at the Africa Movie Academy Awards last month and also won the Gryphon Award at Giffoni, one of the world’s premier children’s festivals, Best In Show at Longwood Animation Festival, the Czech TV Audience Award at Zlin International Film Festival for Children and Youth, and the Children’s Jury award at Cinemira, among other accolades.

Belly Flop also screened at Oscar-qualifying festivals like Chicago International Children’s Film Festival, Anima Mundi, and the world’s top animation festival, Annecy, where it was shown during the closing ceremony, alongside DreamWorks’ latest short film, Bilby, and two others.

Belly Flop is based on a screenplay by Dillon which won an internal scriptwriting competition at Triggerfish in 2011, with the five-minute short being made as a passion project during downtime at the studio over the last seven years.

“The character of Penny was inspired by a girl I au-paired for when I was at university,” says Dillon. “I remember when she started taking swimming lessons, I admired her persistence in learning to dive properly, oblivious that she kept belly flopping. This short film has taken seven years, so being named Africa’s best animation really reinforces Belly Flop’s message that perseverance does pay off, eventually.”

With Marc Dey, Dillon also co-wrote Ninja Princess, one of the winners of the pan-African Triggerfish Story Lab. The series is now in development with Triggerfish and global A-list partners.

Collins is a freelance animation director based in Cape Town, who has over 20 years of experience creating short-form animation and motion graphics.

“The process of making Belly Flop has been a lot like Penny’s day at the pool: a combination of perseverance, hard work and plain good luck,” says Collins. “We started production in 2015 and finished the edit in January 2018, which is why our credit roll is so long. With the exception of the first month – when fortune smiled on us and we suddenly had a full studio at our disposal – during the rest of production we worked with small teams, in short bursts between other projects. Thanks to Kelly and Anthony Silverston, Triggerfish’s head of development, we kept the momentum and  maintained focus. I’m absolutely delighted by the response we’ve had from audiences all over the world, and I can’t wait to share our little movie with a wider audience, especially here at home.”

Belly Flop is the latest success from Triggerfish, Africa’s leading animation company, who helped animate Revolting Rhymes, Magic Light’s BBC One Christmas special adaptation of the Roald Dahl classic, which was nominated for an Oscar and won at the Annie Awards, Kidscreen, and The International Emmy Awards this year. Triggerfish is currently in production on their third feature film, Seal Team, among other projects.

Established in 1996, Triggerfish is a Cape Town-based film and entertainment company. The studio has produced two of the top five highest-grossing South African feature films of all time: Adventures in Zambezia (2012) and Khumba (2013).

Revolting Rhymes was nominated for an Oscar and won over 15 international awards, including the International Emmy Awards Kids: Animation prize; the Cristal at Annecy; Best Animated Special at the Annie Awards; Best One-Off Special at Kidscreen; and Best Animation at the BAFTA Children’s Awards.

Triggerfish has just finished Zog, another Julia Donaldson and Axel Scheffler adaptation produced by Magic Light Pictures for BBC for Christmas 2018, and is currently in production on its third feature film, Seal Team.

THE 2018 COWBELLPEDIA CHAMPIONS OF MATHEMATICS