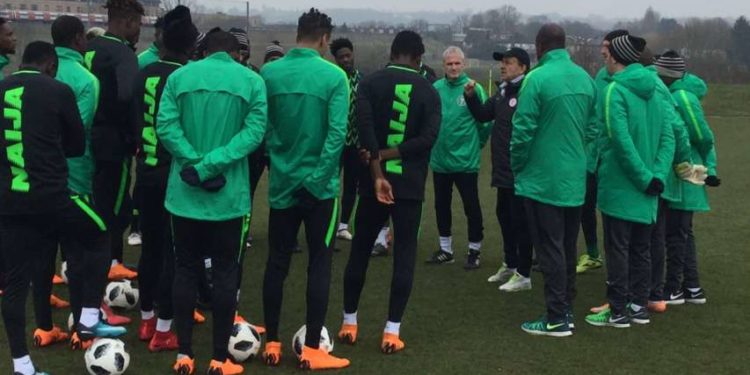 In preparation for Super Eagles’ upcoming Cameroon 2019 qualifiers against the Bafana Bafana of South Africa, the Nigerian players have started hitting the camp ahead of today’s opening training session.

As earlier stated by the Federation, Wilfred Ndidi (suspension) and Francis Uzoho (injury) will miss the encounter.

The Eagles will start a twice a day training sessions today and are expected to fly to Johannesburg on Thursday evening for the match which is scheduled for Saturday.

Meanwhile, Bafana Bafana Coach, Stuart Baxter is confident his wards can see off the Super Eagles despite numerous injuries.

He said: ‘‘We do have Nigeria first‚ in the small matter of an African Nations Cup qualifier.

‘‘Everybody knows the list of injuries that we have had. Everybody knows what I said in the first press conference (a week ago) that despite that (the injuries) I want to speak about the players that we do have because even though we respect Nigeria, we do not fear them.

“I think we still have enough talent‚ enough desire and if we can structure a game plan in the next three or four days‚ I think by the time we run out onto the FNB Stadium we would be confident‚ we would not be complacent‚ because Nigeria have just come from a (2018) World Cup (in Russia).

‘‘They are undefeated since we beat them the last time (in the first qualifier in June last year) and they will certainly want to wreak their revenge.

‘‘So‚ we will be ready and I still believe that we have a very good chance of getting the result that we need.”